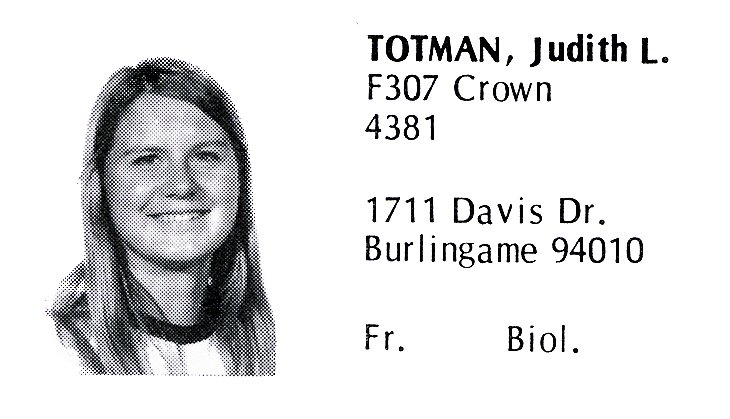 I came to UCSC under the influence of my parents. I wanted to go to UCLA; they thought I’d be lost there. I’m so glad I came to UCSC. I’m still not sure how I got in because I was a B student in high school. Most of my classmates at Crown were A students or even valedictorians at their high schools. I guess getting in with a B average is what passed for diversity back then. Some students couldn’t handle being in with other kids as smart as they were, but I thought it was great to be surrounded by all these smart people. The young faculty were also fun to learn from, although some of my more memorable classes were with faculty who weren’t so young, and of course, Ken Thimann, who was wonderful, was no spring chicken, either! I have fond memories of the staff, too, especially Peggy Vecchione, who was kind of everyone’s mom.

My experiences at UCSC were probably not all that different from other students’. I remember many late-night discussions and movie nights. The music: Simon & Garfunkle, Pentangle, Jefferson Airplane, the Grateful Dead, Sly & the Family Stone…but also opera—I first learned about “Prince Igor” at Santa Cruz, awakening very late at night at the end of a party to the transcendent melody of “The Polovtsian Dances”. The campus was isolated, I didn’t have a car (few students did), and bus service wasn’t great, so we pretty much stayed on campus the whole time. I don’t remember feeling confined, though. Between classes, studying, hanging out on the quad in front of the dining hall, and our ever-ongoing discussions about everything under the sun, I was never bored. UCSC was small, I think about 2000 students in three colleges when I was a freshman, so at times I felt I knew just about everyone, especially at Crown.

UCSC was perfect for me in another way, too. I grew up camping, hiking, and backpacking, and the campus had many hiking trails and places to throw down a sleeping bag far from the buildings. I took advantage of this natural beauty often.

The faculty were remarkably supportive of extra-curricular activities. I kept some papers from my time at Santa Cruz, and I led a small group of students concerned about the treatment of women and made a report to the administration about it. Even though I don’t remember being much of a feminist, the issue must have resonated with me. I also led a group of students who organized the first Earth Day in 1970 and was given credit for that in a Politics independent study. That brought me into contact with students at other UC campuses, especially Berkeley. I still have the letter from Dean McHenry commending my work, and I remember being surprised he even knew I’d been involved. These activities impacted my class performance, but the faculty took them into account in their evaluations.

The faculty also worked hard to bring in outside speakers and performers. One of my fondest memories was being able to see Tom Lehrer perform. I was familiar with his music and comedy because my parents had one of his records, which I was forbidden to listen to (it was very racy for the times). Of course, I listened to it every chance I got! Only Crown students and faculty were allowed to attend his concert in the dining hall, much to the dismay of everyone else.

And only at Santa Cruz could there be a class in wine-tasting outside a full-fledged wine-making program. The course was taught by Burney LeBoeuf and Joe Miller, which I took my senior year (students had to be 21, obviously). The final exam was rigorous—we had to identify the grape, the year, and the country of origin in a blind tasting of about eight wines. I did well and remained an aficionado until I acquired an allergy to my favorite wine, oaky, aged cabernet (with a touch of green olives).

I can’t remember if we could state a college preference when we applied. If we could, I would have picked Cowell because I intended to major in Spanish literature. Instead, I was assigned to Crown. Crown was known as the “science” college, and majoring in science was the last thing on my mind. The joke was on me. My freshman year, I took a Spanish class that I hated (the only class I took at UCSC that I hated) and a biology class that I loved, and I never looked back. The biology class was marine biology, taught by the late Harry Beevers, who to this day is one of the best lecturers I’ve ever heard. And that’s saying something, given I’ve spent most of my career in academia.

After I graduated, I worked for Burney LeBoeuf for a year as a field assistant—I’d already done my senior thesis with him. I ended up entering the graduate program and getting my MS in biology. In the middle of grad school, I met Léo Laporte and got interested in paleoecology, eventually switching to earth sciences and getting my PhD. So I was at UCSC for many more years than most students. It wasn’t because I didn’t want to leave; it was because amazing opportunities kept presenting themselves. I’m still amused that I made a career as a scientist, all because the science faculty at UCSC were so incredible.