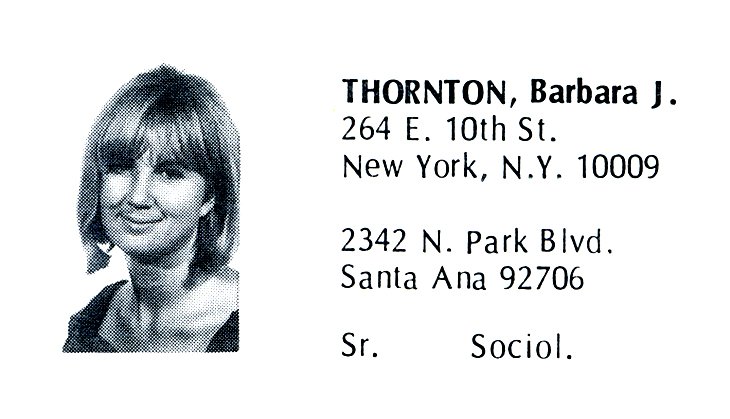 Although I graduated in 1969 with a degree…. I made up the title…. in Urban Environmental Studies, I arrived in 1997 after 2 years in an Ohio college ostensibly studying astronomy. I encountered the world’s worst teacher and a college filled with Greeks and very large private tuition bills. Switching to a Religion major didn’t help. So with encouragement from Winnie Scherrer and a UCSC phd candidate in philosophy, I transferred, arriving after the worst of the mud situation had been cleared up.

UCSC had wonderful faculty. I don’t remember spending more than a few hours in the library – but there were wonderful conversations with many profs that challenged me and made me grow. Prof Herman Blake sent many of his students to the South Carolina Sea Islands. Me he sent to the center of the New York City teachers’ strike to work in Fort Greene for a war on poverty program that needed a white girl in order to be in compliance. I stayed for at least two terms and also worked with Harry Quintana on Planners for Equal Opportunity which led to time learning about city planning in Manhattan. That became a focus for post college work. When I returned from NYC, I worked with a team of UCSC students (Mark?) to write a report for the County. Annexation or Incorporation.

I didn’t stay long, maybe weeks, in the Crown dorms. I moved with a friend, Candy Hyde, to live in the cottages near the “fun zone” at the beach. Like every student who lived off campus, I hitch-hiked to classes. That first Thanksgiving a fellow student and I jumped into boxcars from a nearby train yard until Thanksgiving night we got to Oregon. The brakeman shared his turkey sandwich with us. We slept on the floor of the depot and headed back south the next morning. We got bumped by the RR police near Mt. Shasta and gradually hitch-hiked back to campus from there. I would love to find the guy who took that trip with me but can’t even remember his name.

Fast forward: Yale School of Art and Architecture, for a city planning degree. But the school sort of blew up the summer before I arrived. I took the courses for year one but Yale decided to kill the department and paid my way to MIT Dept of Urban Studies and Planning for my final year. I got picked up one afternoon on the Boston Common. 50+ years later we are still happily married with two kids, their spouses and, so far, two grandkids.

Sliding backward. Somewhere between kids and grandkids I went to Harvard Business School for an MBA. I was about 20 years older than all the other students…. and I had a wonderful time! I tried and discovered I could never be an investment banker or a management consultant. So in 1997 I started what I’m told was the first ecommerce company in the world to sell shoes on line. I loved it for 12 years. And closed it after 14 years. I learned two lessons. Google is NOT your friend and there is no apparent remedy for the huge amount of misogyny facing women.

With that in mind, around 2007, under the umbrella of the HBS Alumni of Boston association, I started a program called “Startup Partners” to provide an in-depth 2-hour encounter for an entrepreneur with a specially arranged team of “Advisors” to help answer one or two challenge questions that are keeping them up at night. That continues to be very satisfying.

Also satisfying…. working with my Town Meeting (yes I live in New England and we have a costumed fife and drum corps with flags to start our annual meetings) I got an “accessory dwelling unit” bill passed last year. Spent 30+ years on the Capital Planning Committee. It was a vacation after a decade living in the Charlestown neighborhood of Boston through the peak of anti-busing violence.
I have recently started to work on the last item on my bucket list – a book about governance and social justice in Santa Ana/ Orange County CA in the 1950’s and 60’s. So far VERY interesting! (Still looking at annexation vs incorporation.) Those times in OC were eerily similar to what has happened in the US. So now the idea of saving democracy one day at a time has become my most recent obsession.

I would be delighted to hear from anyone from the class of 1969 (on this list, so far, I recognize Chu and Pearson), the guy who rode the rails with me over Thanksgiving 1967, Dennis-the philosophy phD, and others. A special thanks to Jim Lapsley, Lisa Rose and Susan Nerton for getting me to do this essay!