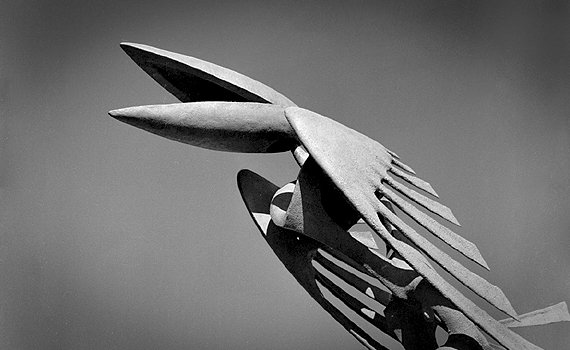 In reminiscing in advance of the 50th Anniversary of our graduation, saving a few words for the “Scavenger” stabile that sat over the entrance to Crown College seems fitting. It was for me the icon for the time we spent there. It summed up my experience: unique, individual, and a bit odd. The “Scavenger” is gone now. The rumor is that it was too damaged in a storm to repair. It was made of fiberglass so that seems plausible, but there seem to be no details of its demise. In fact, details on this sculpture are a little hard to confirm. Still, here’s what I know.

The sculpture was created by Robert B. Howard (1896 – 1983) who was a well-known artist in the Bay Area during the early and mid-20th century. He was eclectic at the very least. He was drawn to Kinetic Art and created many stabiles and mobiles. These are mostly in private collections. His more public art is somewhat accessible and broad in scope including murals, oil paintings, granite sculptures and huge poured concrete building ornaments. There is a poured cement ornament of a phoenix at Coit Tower, murals and sculptures at the SF Stock Exchange, and oil paintings at the (formerly known as) Ahwahnee Inn in Yosemite. Then there is “Naked Guy” which hangs off the side of a building at Kresge College.

How the “Scavenger” sculpture (if that is its name) got to Crown is probably related to the fact that Robert Howard was Professor Henry Hilgard’s father-in-law and Galen Howard Hilgard’s father. Details seem to be lost in the mists of time. Anyone knows more, please chime up in the comment section below.

Click here to view all of the Robert Howard statues at Crown College in 1968.