Creating the playlist for the Crown 50th Reunion was a labor of love. I like to think of myself as up-to-date in some areas, but when it comes to popular music, I am completely stuck in the ‘50s, ‘60s, and early ‘70s. 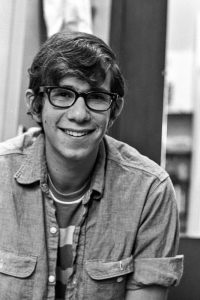 I made no attempt to be definitive or encyclopedic. I used what I had on hand, supplemented by a few purchases. It consists of music that I like, and a few that I thought should be included although I don’t especially care for them, e.g., the aforementioned CSN&Y.

I’m glad to have a chance to explain several inclusions. “Thus Spake Zarathustra” is on the list because it was the music scored for that famous early scene of the ape using a bone as a weapon in 1969’s “2001: A Space Odyssey,” a hugely popular and influential movie (and a favorite of my girlfriend at the time). Two the of the songs from the 1950’s are “Green Door” and “Heartbreak Hotel” (Elvis Presley). Apart from their merits as music, they’re on the list because during the Fall 1967 quarter, the first that I was at UCSC, I lived on 3rd Floor Maxwell House with Jim Lapsley, Henry Chu, and Richard (Animal!) Pearson. An AM station in Monterey had an all-request hour at 9 p.m. Every weekday night that quarter, one of us would call the station and request “Green Door” and “Heartbreak Hotel.” And every weekday night, the station obliged us (it probably had very few other requests), playing those songs as we listened together, singing along.

“Zorba’s Dance” and “Daichovo Horo” are the only nods to folk dancing, but the former is also a wink at Dave Karnos. Should have included “Strose To Soma Sou.” (Mikis Theodorakis died in September 2021.) “Ripple” is there because it’s a wonderful song and Jim Lapsley’s favorite Dead song.

“You Can Get It If You Really Want” by Jimmy Cliff is on the list, even though I’m not sure if it was released during my self-imposed time constraints. Why? Because it was on the soundtrack of the movie, “The Harder They Come,” which is, like, the greatest movie soundtrack in recorded history, with the possible exception of “Singin’ in the Rain.” Scott Joplin’s “The Entertainer,” from the soundtrack of “The Sting” is similarly included without regard for time constraints because I thought about including a song from the previous Paul Newman-Robert Redford movie, “Butch Cassidy and the Sundance Kid” which was within the time constraints, but I can’t stand the hit song from that movie, “Raindrops Keep Falling on My Head.” A final mention of a song outside of the time constraints is Bruce Springsteen’s “Rosalita (Come Out Tonight”) because I think it is the greatest rock ballad ever.

The list includes 354 items. If one assumes 2:30 minutes for each item, the list is about 22 hours long. To save space, the format is  mp3@128 kbps. I was concerned about the audio quality but quickly discovered that I can no longer hear the difference between 128 kbps and higher rates on music of this type during casual listening.