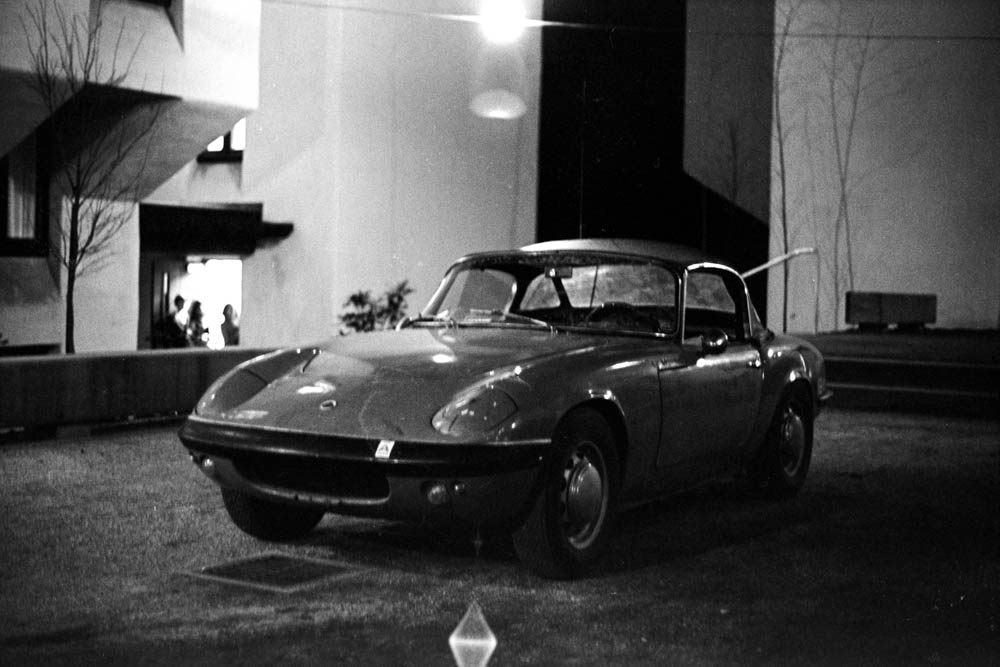 Picking up a car and moving it was the kind of college prank associated with places like Chico State, not UCSC, but, as they say, “pictures don’t lie” (at least they didn’t before Photo Shop). It was a spur of the moment idea, made somewhat easier by the fact that the car was a Lotus Elan and quite light. We didn’t need a football team to move it.

The Lotus was the proud possession of Harold G. Mccann, a new professor of Sociology (he had studied the professionalization of chemists in the U.S. using the then new idea in Sociology of examining “networks”). Mccann was also the Maxwell House Preceptor and the relocation of the Lotus by Maxwell House residents was, I believe, a way of expressing our deep love and admiration for our Preceptor. Or, maybe not.

It must have been around Halloween in our first quarter, because it was pretty dark by 6:00 pm. And there were still construction materials lying about Crown. Mccann had been invited for drinks and dinner by Jim Chrislock, the Preceptor of Harvey House, which was located at the top of the lower quad. Now, before you say “Wait a minute, Harvey House is in the upper quad,” let me remind you that in the first year at Crown, the lower quad was female, the upped quad, male. The following year the quads became “integrated” with Galileo and Harvey house switching names along with Galen and Gauss houses. That is another story that perhaps Bob and Nancy Hanson might write for us.

Back to the Lotus. Rather than walk 1/8th of a mile, Mccann had driven his Lotus Elan to Harvey House and had parked it on the pavement between Harvey House and the Library. A bunch of us had come out of the Dining Commons, heading to the Library, and caught sight of the Lotus, sitting close to the top of the first flight of stairs to the lower quad. About 12 of us lifted the Lotus and carried it to the top of the two flights of steps. We then scavenged plywood and constructed ramps, to move the Lotus safely down the stairs, locating it securely in the Lower Quad. The Lotus was a valuable sports car and we figured that no one would steal it from the Lower Quad.

Needless to say, Mccann walked back to Maxwell House that night. The next morning, with the help of some construction workers, he secured more plywood and made a ramp to free the Lotus from its captivity by rolling it down the east set of stairs to the access road below. We had been very careful not to damage the car when we moved it to the Lower Quad. Unfortunately, in removing the Lotus, Mccann slightly damaged the exhaust system. We all felt a bit responsible about that, but not enough to take up a collection for repairs.

Mccann did not renew his preceptorship the second year and Maxwell House had the pleasure of meeting Bill and Randi Schubach, a lovely couple who won us all over by hosting brunches. But, again, that is another story.