The Brief and Wonderful Life of a College Band — Personal History 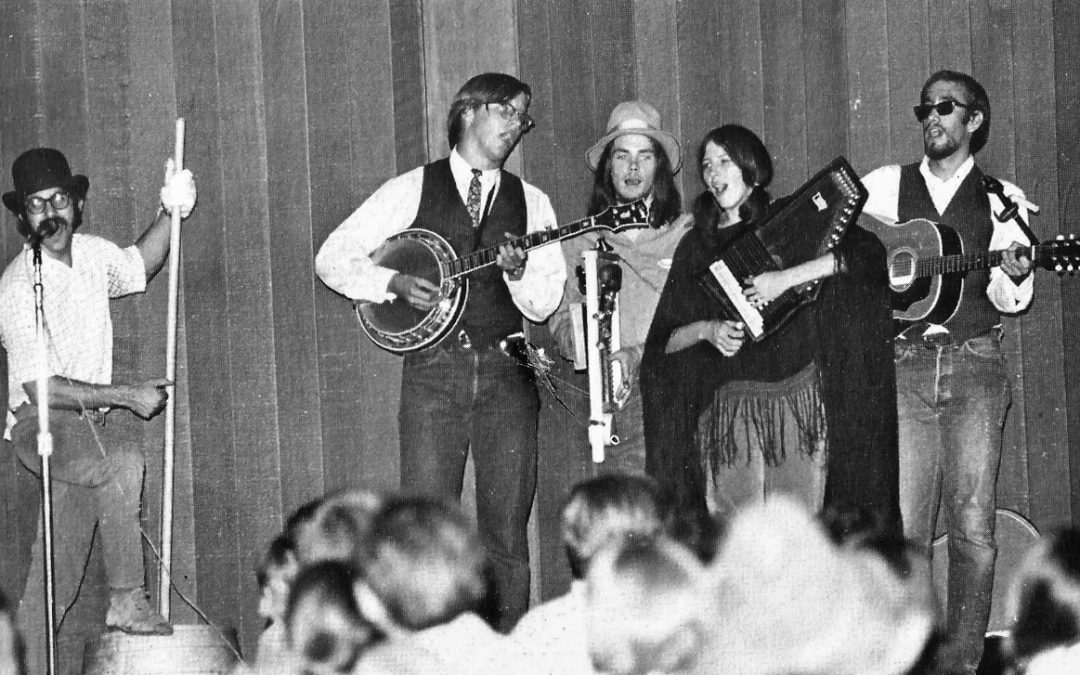 A college band is an ephemeral thing. Very few of them stay together for long. Sure, there’s the occasional exception, like, um, the Kinks (the only one I can think of and we certainly weren’t them). Mostly they come together for rehearsal time snatched between classes and a few evenings of joyous fun on stage. Maybe there’s a stab at going pro in the music business, but it’s not really a business at heart and never will be.

The Bernard Baruch Memorial Jug Band was just such a college band. It sprang from a cheeky, irreverent faction of the 1960s Folk music revival. The Jim Kweskin and Even Dozen jug bands popularized the style and defined the playlist, which was built around songs of the Depression era, Dixieland, Ragtime, Blues, and novelty songs.

The BBMJB was Bob Goldman’s brainchild, love child, and every other kind of child. Songs like “Huggin’ and Chalkin’” by Clancy Hayes and His Washboard Five were Bob’s inspiration. He had been in a jug band before coming to UCSC and was enthusiastic about building a new one. When he asked me to join, I said yes right away and suddenly found myself hanging out with four fine musicians, the best people you could ever want to know.

The band members
The band was hot, with Al Phillips anchoring rhythm on acoustic guitar; Ron Rutowski seeming to play every stringed instrument you put into his hands (guitar, banjo, fiddle, etc.); Crile Carvey brilliant on vocals, washboard, and harmonica; and Bob hyperventilating on moonshine jug and snapping that washtub bass. I was the girl singer, harmonizer, and had my June Carter autoharp always at the ready. Kazoo was handled by all.

The songs
In addition to “Huggin’ and Chalkin’,” go-to favorites included “Rag Mama,” “Coney Island Washboard,” “Minglewood,” “Sportin’ Life,” and “Sadie Green (the Vamp of New Orleans).” Each of us remembers different songs but as soon as someone mentions a title, it all comes back: “Oh yeah! That one!” I suspect all of the songs are imprinted deep in some part of our lizard brains where they sleep until disturbed.

The band name
Al Phillips came up with the band name. He thought it was the perfect irony to name a rag-tag jug band after a rich American financier from the turn of the century. Mr. Baruch actually had nothing to do with the formation of the band.

The story
Beginning in the fall of 1967, the BBMJB played at Crown college nights in the cafeteria surrounded by friends and friends-of-friends whooping and shouting and having a good time. On weekends, we were the house band at a tiny place called The Grass Cookie. It was often crammed to the rafters with the same audience as college night, just crowded into a smaller, sweatier space. It, too, had a brief life span, opening in the fall of 1967 and serving their final piroshki in fall 1969. (If you remember the piroshkis leave a review.)

In the summer of 1968, the band went to LA to see about breaking into show biz. Highlights included opening for the R&B/Rock band Sons of Champlin. (Nobody in that audience wanted to hear a jug band.) The other highlight was a regular gig at a restaurant owned by Lurch from The Addams Family. (Really. He was a very nice person.)  Needless to say, the music business was not lit on fire. We returned to Santa Cruz.

Although it might seem as if the band played on, it didn’t. No one remembers exactly how or when we drifted apart, but that year other things became more important and life got on with us. We played a few gigs in the fall of 1968 but not much more than that if memory serves (which is a big “if”).

Recordings and photos
There was one recording of the band but it vanished long ago. No one knows its fate. Maybe it will surface one day as a “rare collectible” on eBay. Photos are nearly nonexistent, although thanks to the Reunion Committee a few have been uncovered. But that’s the thing about college bands. Who in their right mind would think you might want such things 50 years down the road. 50 wha??? Is that even a thing?

Postscript (because everyone should have one)

Bob Goldman, aka Bobby G, is a successful New York artist whose whimsical, soulful work is just like Bob himself. Critics like to describe his art with phrases like “a visually discordant rupture in pictorial aesthetics.” In other words: good, hardworking art.

Ron Rutowski earned his doctorate in neurobiology and went on to specialize in zoology, of course, being such a rare creature himself. He retired after 40 years on the faculty at Arizona State University but never stopped playing music, including 10 years as a part time member of Glen Campbell’s road band. Fiddle is his instrument of choice.

Robin Frederick: For much of my career, I was given the gift of doing something really odd. I wrote and produced hundreds of songs for Mickey Mouse, the Looney Tunes, the Little Mermaid, Winnie-the-Pooh, and just about anything with fur and a cartoon show. I hear more than an echo of the old jug band tunes in those songs. These days, I blog and write books about songwriting.

Crile Carvey is exactly the person he always was: talented, smart, down-to-earth, ready to take on whatever life decides to throw at him. He’s just the kind of consultant that start-up companies need to kick their dreams into reality, and he does.

Al Phillips got his medical degree and went on to become a psychiatrist working with adults and children. For a decade he specialized in treating severely burned patients. Now he says he likes sitting and listening all day while people of all ages tell him their stories. He always was a good listener.

In one way or another, each of us is the same person we were back then, just more, better, deeper, and a little wider. We bring so much of our younger selves with us through life. But I’ve learned there are other things, fleeting things, that are best left behind. A college band is one of them. It is an exuberant moment of energy that gradually ebbs, eventually becoming part of the river of music that flows on. We remember our college band with love and I believe somewhere in our lives it keeps on playing.