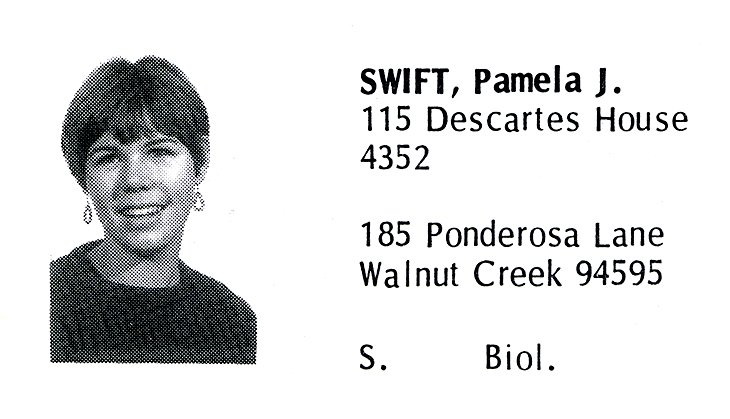 My parents, working-class people from the Bay Area, were not too keen on my going away to college. At the beginning of the process, they drew a 100-mile circle around Walnut Creek and said that I could go to any public college I could get into within that circle. Private colleges were unthinkable. So, of course, I chose the university on the very edge of the circle: UC Santa Cruz.

I knew nothing of the campus except that it was new. That was good enough for me. Although, in my application. I had listed alternative UC campuses… I think you were supposed to… I really only wanted to go to Santa Cruz. Truly.

I wrote my application essay on Ethology, the study of animal behavior. I had read a Time/Life book on the subject which featured the imprinting theories of Konrad Lorenz, and I was fascinated. I didn’t know any of the professors at that time… I didn’t even know enough to be aware that their names were available. I’m sure someone in the admission office saw my essay and said “send her to Burney.” As it turned out, Burney LeBoeuf became my advisor. I probably disappointed Burney many times over, because I eventually turned away from hard science and studied autism. But Burney was always supportive and good-humored. And his and Joann’s kids are still friends with my kids today. As it turns out, Crown was a good fit for me. I feel my science background at Crown has helped me throughout my career as a special educator.

The day I got my acceptance letter was one of the five happiest days in my life. My parents were at work in San Francisco, so I had no one to share my excitement with. That didn’t stop me. I ran up and down my street, knocking on the doors of my neighbors. They didn’t know much about UCSC, I’m sure, but they could see my future on my face.

My friend Mary Beth. who had also been accepted to UCSC, invited me to go visit the campus with her family. My parents didn’t like Mary Beth’s parents because they were college graduates. So my parents wouldn’t let me go. Thus, the first day I saw the campus was the day I moved in. I saw redwood trees, an ocean view, a library right near my door, and lots of people who enjoyed serious discussions. I thought I had landed in heaven.

Funny final story: the next morning, we lined up for breakfast at the Crown Dining Hall. As we passed by the pancakes, I asked, “what’s that?” Seriously, I had never seen a golden brown pancake. My Mom wasn’t much of a cook. But my parents, originally hostile to college in general, would change as much as I did over the four years. They came to appreciate how lucky their daughter was to be able to go to such a university, and they were thankful.