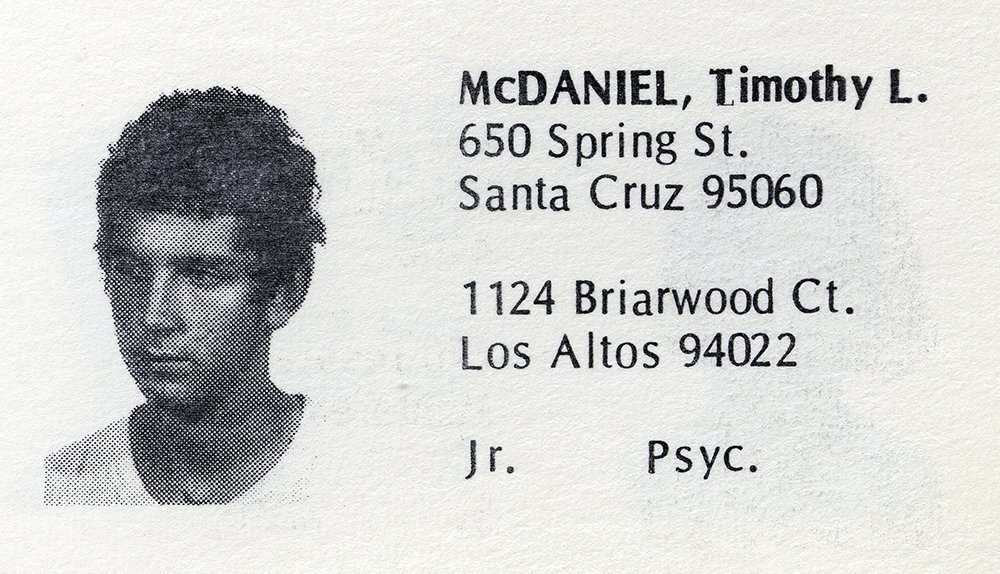 Tim and I were put together in a room through the brilliance of Howard B. Shontz, our UCSC Admissions Director and Assistant Chancellor. They wanted a couple of upperclassmen to help the newbies of ’67 along. I came from dropping out of the USNA in ’66, and Tim came from Yale after having burned his draft card I believe in the days of the Rev. Sloan Coffin and Dr. Benjamin Spock.

Tim was a polymath who did everything I didn’t. Played tennis with his twin brother Pat (Stevenson ’69), cranked out the loudest rendition of Don Giovanni ever heard at Maxwell, and brought one of the first cats to the dorm; Tiamat, more than just Sumerian chaos. For a Crown College Skit night he orchestrated a memorable performance of John Cage’s 4’33” with Paul Jammond on the piano, Doug Davies on tabla, Tim and I standing. Midway we began to receive shouts and veggies on the stage, until someone at the tables shouted “Fools, we’re the music!”

Tim left UCSC to fulfill his CO alternative military service in Chile where he shuffled things for friends of Allende, once confiding to a colleague later at UCSD that had he been arrested he would have been toast. He returned to UCSC, graduated, grad school at UNC Chapel Hill, Berkeley and then a brilliant career at UC San Diego in the Sociology Department https://sociology.ucsd.edu/people/memoriam/mcdaniel.html

Three major books on Russia and Iran made him famous. Three trips to Moscow with students made him beloved. He was two months older than me, and the smartest man I have ever met. He was once even a poker dealer in a Reno casino.