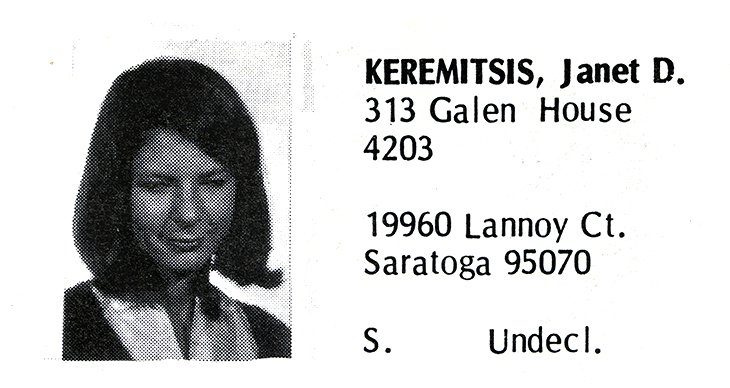 Janet Keremitsis was the very first person I met at UCSC. I had been dropped off by an aunt I barely knew since my family was overseas, and I wandered around watching other students arriving with parents and siblings. Janet was also alone so we explored the campus together and  met a cute guy (who only had eyes for her.)
She taught me how to drive a stick shift and was with me when I bought my first car, a 64 VW bug that blew up the last day of junior year. I shared many adventures with her during our four years at Crown. We both graduated with BAs in psychology but she decided at the end of her 20s that she wanted to be a doctor and went back to get a BS in biology and was accepted to medical school when most of her classmates were a decade younger. She became a pediatrician in Davis, CA, married, and had two daughters.  Our paths crossed infrequently, and it was a huge shock when her daughters told me she was undergoing a bone marrow transplant at Stanford to try and stop the advancement of aggressive leukemia.  I was unable to attend her memorial service at the Arboretum at UC Davis, and it wasn’t until many years later when I walked around its beautiful grounds with my Aggie daughter that I could imagine saying goodbye to her. She was a part of so many of my college memories, a great friend, and I miss her.