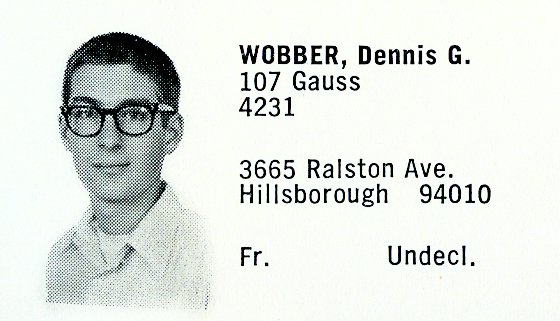 These memories of Dennis are based on both my recollections and our correspondence just before he died. I had sent Dennis a short get well note, and in it I recalled some of our antics years ago. Dennis responded with an 8-page hand-written letter, adding his own memories. The letter was written, in part, on December 8, 2021, 6 days before his death at age 70.  He left behind the love of his life, Constance Brede (another UCSC graduate), his beloved cats, Chip and Dale, and countless life-long friends.

Dennis was a shy but funny sophomore when I first met him. He lived on the second floor of the Claradon “apartments” – really just decrepit efficiency units high above the mouth of the San Lorenzo River. Dennis was the roommate of my friend Tom Leddy. He and Tom would listen to Schoenberg on the record player(!) Tom, a Philosophy major, and Dennis, a talented French Horn player and music major, would chat for hours about the ideas behind modern music. At that time, Dennis was busy composing a Chamber Music piece called “The One Child Family”. It was both scholarly and hilarious. Dennis recalls the premier performance by a vocal quartet in the Music building, with me sitting in the front recording on my open reel machine and “chuckling in the background several times.”

Like many of our accommodations then, cooking and cleaning were not high on our priorities. I remember a big pot of soup that would sit on the stove for days, slowly being consumed and never refrigerated. Dennis reasoned that we heated it up every time- or maybe almost every time- so all of the bacteria must be killed several times over.

We were lucky in so many ways.

Dennis was then, and was always, the soul of integrity. He loved the environment and the creatures in it. But more than that, Dennis felt it was important to be an active caretaker. He, Tom, I, and others formed the “Crown College Garbage Collective” (as I remember it) or the “Garbage Cult” (as Dennis remembered it.) Our job was to collect the cans, paper, and cardboard, and take them to the fledgling recycling center across Highway 1. By his own admission, Dennis did almost all of the work. “I spent hours flattening cans and cardboard to ready the material for delivery to places that would take it. One time, recognizing the environmental impact of putting a load of cans into a car and taking them to a recycling center, I borrowed a wheelbarrow from UCSC Facilities, loaded it with flattened cans, and wheeled it about 2 ½ miles down Western Drive, across Highway 1, to the recycling center. Then, I walked the 2 ½ miles back with the empty wheelbarrow. So yes, I was a nut.”

But it didn’t stop with the wheelbarrow. A few days later, Dennis and a group of friends from Gauss House encountered the remnants of a private mid-day party in the Crown Dining Hall. Dennis remembers “There was no food out, but there were a large number of wine bottles, indicating that there had been a huge and important gathering that did not include students… and the wine bottles had not been fully consumed. I honestly don’t remember if we were in the business of recycling glass, but we decided it would be a step in the right direction if we made sure that the wine bottles were empty. There was no readily available sink, so we improvised. We found some clean glasses and we created out own blends of reds and whites, and sometimes mixed red with white to create unique rose’s. They were all delicious.” Then it came time to go home to the Claradon.

“I must have taken the bus into town, and I must have followed the railroad tracks for part of my journey on foot.  I thought I would take the opportunity to pick up recyclables on the way. But I soon had more than I could carry. Luckily, I found a large plastic bag and began filling it with cans. As my haul mounted, it occurred to me that the people who discarded the cans did not care about recycling, or even littering. Each can I found became an affront to everything I had worked for: it seemed that a large segment of humanity was against me. After a while, my bag was heavy and full, and I had to leave many cans behind. My effort seemed futile. By the time I got home, I was devastated.”

So there’s the scene. Tom and I are sitting in the kitchen, partaking of the pot of soup. The door flies open. Dennis staggers in reeking of beer and wine, falls to the linoleum, and babbles through tears about the futility of it all.

Fortunately, futility was Tom’s bailiwick: after all, he was a Philosophy major.

Dennis we miss you, we love you. It was so wonderful to share this part of your life.