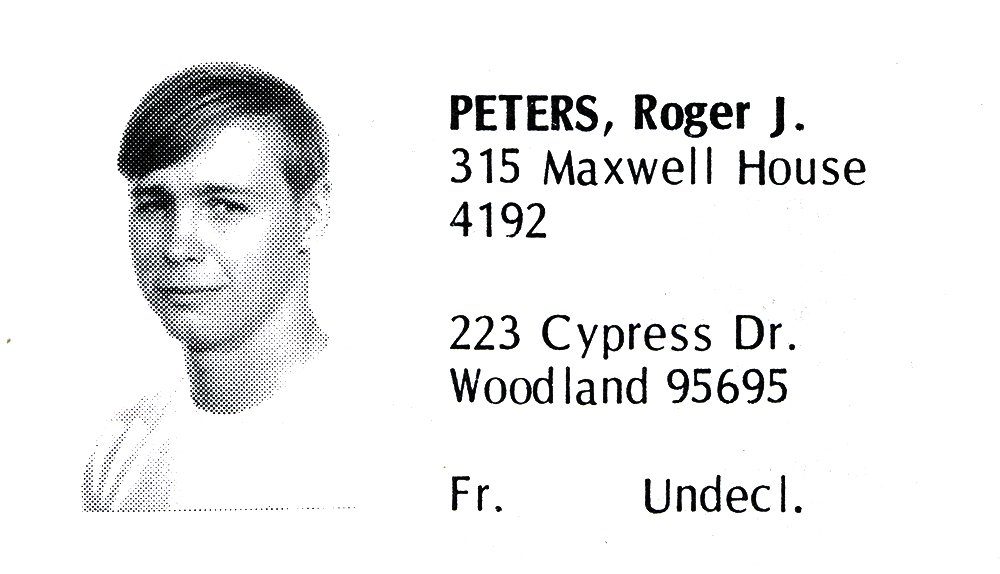 How I Came to UCSC and Crown

I was born and raised in the upper Sacramento Valley—hot in the summer and tule fog/cold weather in the winter. I was psychologically predisposed not to want to attend college in Southern California. Although I danced to the Beach Boys, I was inclined to sway more to Dylan, Baez, and Neil Young, so Santa Barbara faded. I lived 10 miles north of Davis and that was way too close to home, and hot as well. My oldest brother had returned north from Caltech and was a grad student at Berkeley. Great place he said; but you could get lost pretty easily too as an undergrad, so save that for grad school (which I did). So there was UCSC, the last UC standing: not hot, beautiful redwoods towering over the bay, a new approach to education, small and a decent hour and one half from home (not too close and not too far).

The only initial hang-up was that my sister had been accepted to the incoming 1966 class, but after seeing the trailer school structure and all the constant construction, she passed on the opportunity to start literally from the ground up. But once I got a peek at the construction progress two years later that didn’t seem to be a problem. Hmm, this might just be perfect….

The other hang-up was my high school counselor, who was convinced that this was absolutely the wrong place for me. Pass/fail, unstructured academically, maybe a little too progressive, easy to lose focus, and maybe yourself in the process. And so on. Well Jane, thanks for your “advice,” but this sounds exactly like the right place for me. So I joined two others from my high school (the class valedictorian and salutatorian—leading me to the conclusion that as a fairly decent/promising but sometimes lackadaisical student, I was the averaging counter-weight to the other two), paid my $250 per quarter tuition, nabbed a California State Scholarship and headed out of town and into the wonderful world of UCSC. I never looked back.

As to why Crown—the two quads and the distinct houses in each created a boarding house feel within a village within a small city (5000 students at UCSC at that time). I was equally open to both science and social science, so why make the call otherwise at the outset? I defaulted to a science orientation because it might be harder to realign than would be the case in the other direction. I’m sure somewhere in my mind also the thought was gestating that sometime in the distant future we would come to the point where we all (or at least most rational people) agreed that we need to listen to the science more than the politics. And here we are, with pandemic and climate crisis upon us, and science largely the only way back out to clear sky.