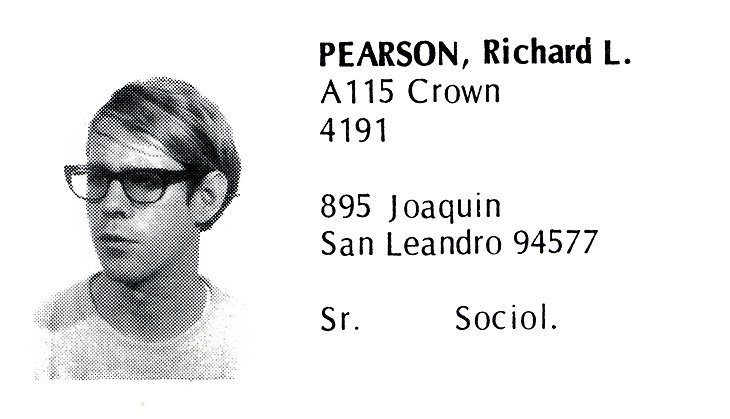 How I came to Crown College, and how Animal got his name

As a high school senior, I was accepted at UC Santa Cruz but chose to go to Raymond College, part of the University of Pacific, in Stockton. At the time, I intended to get a PhD in science. Raymond had a three-year BA program, allowing you to get to graduate school one year earlier. But that did not go well, and I ended up going to Cal State Hayward for two years. Two of my high school friends did go to UCSC, and I visited them several times and decided to transfer. I came to Crown as a junior in the fall of 1967. By then I had decided to study architecture. The plan was to finish up at UC Santa Cruz, then go to UC Berkeley, which had a masters program in architecture specifically for people with a bachelors degree in a field other than architecture.

My room was on the third floor of Maxwell House. There I met the well-known Henry Chu, who brought his ham radio setup and enormous Voice of the Theater speakers with him to college, as well as his Nikon SLR camera! Every morning I worked in the dining hall dish room with fellow third-floor residents Jim Lapsley and Jim Crane. Directly across the hall from me lived Paul DeLay, a film buff. One day I was changing the sheets on the bed, groaning and complaining; Paul heard me and announced that I would henceforth be named Animal because I reminded him of a character in an old movie, Stalag 17. The name stuck, and more people at Crown knew me as Animal than by my real name. And I still answer to that name 54 years later when we have our third-floor annual get-together.