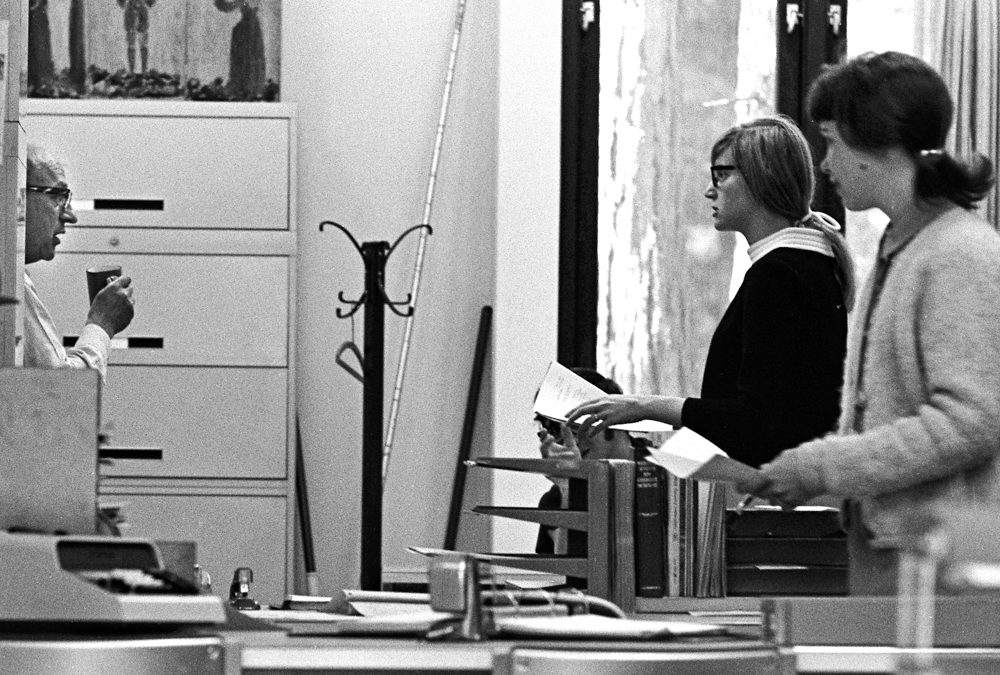 Max Levin was Crown College’s first “Senior Preceptor,” which meant he was in a sort of no man’s land between being the college’s “dean of students” (a position that didn’t exist) and the adult father figure required before U.C. gave up the idea of “in loco parentis.” Dr. Levin was a kind- and unassuming man, always ready to talk on almost any subject. This photo, with him barely in the picture, seems right. He thought of students first and tended to place himself in the background.

Born Menachem Mendel Levin in Chicago in 1916, Max was the eldest child of Jewish immigrants from Russian Poland. A few years later the family moved to Boyle Heights in L.A. In 1928, when only 12 years old, Max traveled alone cross-country to attend yeshiva in New York. Deciding not to become a Rabbi, he returned to California in 1932 and attended UCLA. After graduating from UCLA, he had wanted to head east for graduate school in anthropology but fell victim to quotas on Jewish students. So, in 1937 he headed north to Berkeley and entered the Ph.D. program in Experimental Psychology. During W.W. II, Max served in the Public Health Service and worked with the Homewood Terrace Orphanage, which served Jewish orphans. Following the war, he held academic positions throughout the U.S., including working at the Foundation Fund for Research in Psychiatry at Yale University and then moving back across the country to Stanford, where he directed the Institute for Alcohol Studies from 1961-9167.

Max came to Santa Cruz in 1967 and assumed the Senior Preceptor position at Crown, where he acted as both a counselor and academic parent to each of us. He also joined the Department of Psychology, where he created and taught a course, Youth and Young Adulthood, which seems appropriate, given his focus on young adults. Max retired in 1982 but remained an active participant in the progressive politics of Santa Cruz until his death in 2008. He was 91 years of age and the very definition of “a mensch.”