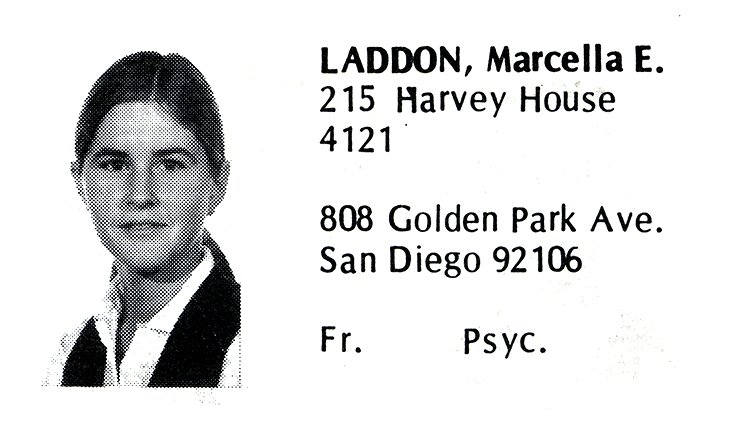 I chose to apply to UCSC because I fell in love with the redwood trees on a visit to the campus in the summer of 1967. In the fall of 1968, when I arrived at Crown College, it was about the size of my high school graduating class in San Diego. I loved walking the paths all over campus and the smell of the crushed redwood needles under my feet on a warm day. I enjoyed sitting in the meadows making huge noises with blades of grass between my fingers. Playing music at full volume with the speakers turned to the quad, singing along with Janis Joplin, torturing RA Susan Nerton with John Phillip Sousa marches and the scent of burning agricultural products were some of my other pleasures.

While living in Harvey House at Crown, I attended classes, ate dorm food, had long talks with new people. We demonstrated at Fort Ord in Monterey against the Vietnam war, participated in the campus strikes about Cambodia, wrote dozens of letters to the draft board in Oakland in an attempt to clog them up with paperwork so that they would have to slow down drafting young men. I was in Berkeley when the National Guard rolled up University Avenue, stood in Sproul Plaza throwing tear gas canisters back at the police. With a few Crown companions, we produced, packaged up, and mailed a box of human feces to Richard Nixon. It was such an intense time politically!

I made so many friends and I took classes about topics I had never thought about before. I had some wonderful teachers who shared their love of their subjects with their classes. In the end, I majored in mathematics because Dr. Landesman made it seem so easy and such an interesting way to communicate.

In a fate I never would have expected, I have spent the last 40 years of my life living near the campus, swimming in their pool, and riding my bike on their trails.