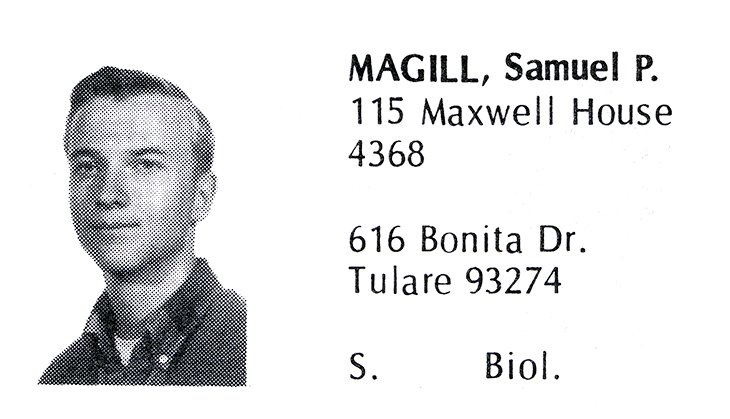 On strike. Shut it down. Hell no, we won’t go. Frisbee in the mud of the upper quad. Surrounding the UC Regent’s bus. College night dinner – wearing a necktie. And now, Black Lives Matter. Whatever innocence we had, whatever innocence we have held onto in the dawning of the Age of Aquarius is once again shattered. I’m so conscious that I knew well the story of the four students murdered at Kent State, but did not know about the two students murdered at Jackson State until much later. The lives of students of color rendered invisible. And this past Sunday, a peaceful march and “die-in” in my nearby town of Mukilteo, Washington; Chanting, I can’t breathe for 8 minutes and 46 seconds. In terrible ways, nothing has happened in the past 50 years.

While there are many heartwarming and many amusing stories from my years at Crown, today they pale in comparison to the big events that shaped my experience. I recall with vivid clarity my walk to breakfast from Maxwell House and Leonardo House. Without instant news on my Android, I looked at the newspaper boxes on my way by. Martin Luther King, Jr. Robert Kennedy, Viet Nam news, Cambodia invasion. And one must not forget gathering in the small room with the only TV as we watched the first draft lottery. Some of the guys cheered; I was in shock when my number, 87, was drawn. All this shaped my remaining time at UCSC and becoming a Conscientious Objector shaped the next two years after graduation. I lost touch with Crown friends as I worked off my alternative service and then slowly reconnected as the time when on. John Beland and I have remained in touch and have had many grand adventures on foot, on skis, in canoes, and in sea kayaks.

Well, that’s pretty much a downer. What else do I remember? The core course remains foundational to my thinking. The history and philosophy of science, what science is, who the names are from the emergence of experimental science – courses like this shaped my orientation to thinking and I remain grateful.

And weren’t there more than a few parties? Oh, my. And dances. And times on the beaches. And. And. Smile.

Professor Lilliman and his wife said to me they thought I was in the wrong field, biology, and that I was more fitted for the humanities. He was, of course, a German Literature expert. Funny thing is, he was right! I’ve written poetry and work in a field closer to psychology than biology. And, having arrived at 70 (how the hell did that happen?), I’m working less, gardening more and still finding new things to keep me entertained. My next project is likely to be building a wooden / fiberglass double sea kayak. Mary (wife of 45 years – another miracle) and I will go camping here in Washington State and up in British Columbia.

It would be grand to see you all in April. On verra. I also teach and work in French after nearly failing French 2 freshman year!