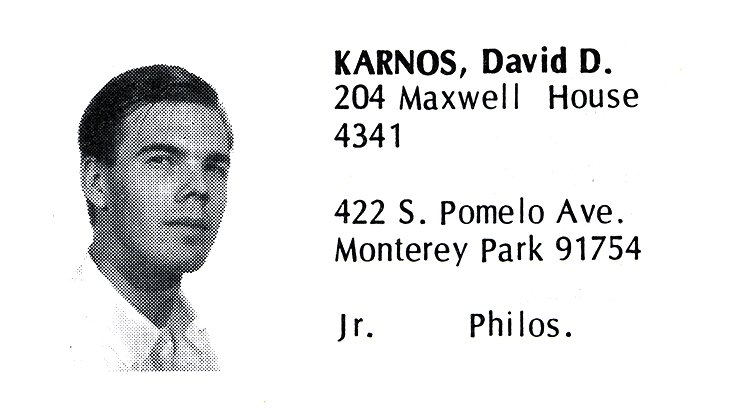 My arrival to UCSC started with leaving the USNA in Annapolis. I had to hitchhike home to LA, in uniform, military rides from various bases, including a private jet ride with a general from Colorado Springs at the Air Force Academy to Travis AFB where I finally took a bus home in April. Moved out, bought my first car, the ’57 MGA roadster, let my hair grow, and with best bud Ross went down Sunset Strip in Hollywood one night in August to hear Buffalo Springfield at the Whiskey A Go-Go, then cruised onwards to hear Donovan play at the Trip (bottom of the Playboy Club) and see my first people on acid.

Annapolis was yet but a few months behind me, and the world so so far ahead of me. A year of plunking at Pasadena City College and East LA Junior College kept me mindless till I received a notice from the US Army (aka Draft board) to take a physical. I freaked and visited my school counselor who suggested I try UCSC since it was new, unheard of, and might be interested in crazies. Since I was still in the Navy (Reserve) I couldn’t get a 2-s deferment, but I might try a stalling technique—keep moving! Drove up in the MGA, stayed at the Pasatiempo, interviewed with Howard Shontz and wow, was I lucky!

UCSC was the logical step forward.