Intellectual Epiphanies and the Pass/Fail System at UCSC – Personal History 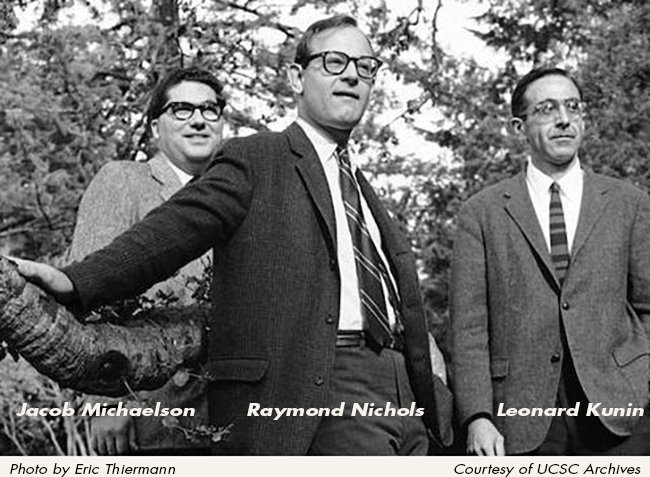 If you had asked me when I was a senior in high school what I wanted to be when I grew up, I would have mumbled a non-response. I hadn’t thought about it. I knew only I was going to college; that was the unchallenged expectation in my home. I knew I liked to learn things, so I knew that I was going to college to study for the sake of studying, not for some future career.
I’ve written elsewhere about my first class during my first year at UCLA (see my modest contribution to “How I Got to Santa Cruz.”) There, I described going to my first class in a theater that probably sat 350-400 students and how the prospect of such “mass education” led to me to apply for transfer to UCSC that very morning.

My first class at UCSC was Politics 101, Political Theory, the prerequisite for almost all other Politics classes. On the Monday following the Sunday in late September 1967 when we all moved into the dorms, I had my first Politics 101 class. It was located on the first floor of the Crown Classroom building, the classroom in the northwestern corner of the building. As I walked the 25-30 yards from the dorm soon to be Maxwell House to the classroom building, I remember thinking how different it was from driving to a parking structure at UCLA and walking a half mile or more to class. When I opened the classroom door and walked in, my internal comparison-meter went into a spin and died. I saw a large conference table, five or six students sat around it, and the professor with thick glasses at the head. I knew Santa Cruz was much smaller than UCLA, but I was expecting 25-30 students for a required class for students in the major. There were six! This was much more than a prerequisite, it was a miracle.

The professor was Ray Nichols, then an assistant professor at Cowell. He was one of the original UCSC professors. Like many of them, he was young (less than thirty, I later determined) and had sterling credentials, e.g., Rhodes Scholar at Oxford and a Princeton Ph.D. He welcomed me and asked me to take a seat. He then welcomed all of us to political theory and said we were going to read Plato’s The Republic, Hobbes’ Leviathan, Machiavelli’s The Prince and the Discourses, and something by Marx, the name of which escapes me. He told us what we’d need to read for the next class, and then he proceeded to conduct an introductory class about political theory in the way in which he conducted all succeeding classes: by the Socratic Method, question and answer.

By the end of the quarter, probably well before then, I was in love with political theory. That was really my first intellectual epiphany at Santa Cruz. It was important, because it meant that I wasn’t going to major in history or philosophy or literature, each of which had been more than an idle thought at one time or another. I was going to major in political theory which to me meant thinking about how one thinks about politics. After all, that was a political time, and what a good thing it would be to study the theories behind it all.

At the end of that first quarter, I had my second intellectual epiphany at Santa Cruz, and Ray Nichols was the source of it, too. It was a statement by him that I knew was true the moment I was aware of it, and it was more of a revelation than any idea I had read or talked about in class. I’ll tell you what it was, but first I want to spend a bit more time writing about Ray Nichols, who was the reason I took what he said so seriously.

In my small world then, the Politics Department was dominated by the dynamic duo of Peter Euben and Ray Nichols, and not necessarily in that order. It was “Euben and Nichols” and “Nichols and Euben.” Each was an amazing professor: superb (to use Euben’s highest encomium) intellects, outstanding teachers, enormously funny, and kind.

I had several more classes with Ray, including two independent studies that were highlights. Each involved political theory and ideology concerning how language affects thought and how though affects action. I remember being introduced to (although, alas, not the specifics of) Durkheim, Wittgenstein, Logical Positivism, Fanon, Sapir, Whorf, and Walter Benjamin, among others. He and I met in his office at Cowell. He asked questions and smoked his pipe while I tried to keep up my end of the discussion.

Those tutorials were in the future at the end of that first class in political theory when I received his evaluation of me. I’ve forgotten most of the evaluation. I think it was largely, “[Compliment], blah blah, [kind words], blah blah.” But then came the part that brought me stock-still and has stayed with me to this day: “Mr. Crane is very good at analysis. However, he needs to improve at synthesis.” I had never thought of myself that way, but as soon as I saw it, I knew it was the pure and simple truth. I was good at analyzing things, at breaking them down into discrete parts. But at that moment I recognized that I wasn’t so good at putting things together, at seeing a larger, more important whole. More colloquially, I all too often lost the forest for the trees.

That evaluation has stayed with me my entire life. Ever since that evaluation, I have tried hard to be better at seeing the big picture, at connecting the dots to discover a whole greater than the sum of its parts. It’s something I struggled with, not only in more “thought-oriented” activities, such as schooling and the practice of law but also in my personal life.

Why all this here and now? When I look back at UCSC, Ray’s evaluation was the first opportunity I had to appreciate the pass/fail evaluation system, the loss of which I so regretted when it was abandoned. Ray’s evaluation did exactly what evaluations were supposed to do. It informed the reader about my work and my performance, but it also gave much deeper and more meaningful insight than a mere grade can give.

Ray died in September, 2019, in Australia. His memory will be for a blessing.