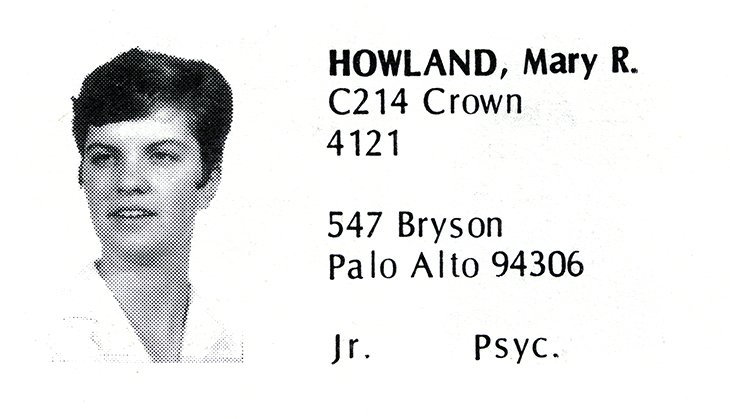 Growing up in the Bay Area, I had visited Santa Cruz numerous times for vacations or just for a day at the beach. When it came time to choose a college, I researched UCSC. I looked forward to having evaluations in place of grades and loved the setting. I also liked the idea of colleges rather than just one big campus. Originally, I considered applying to Cowell. I was not sure whether I would major in psychology or English, and the Cowell core courses sounded interesting. During my senior year in high school, I took two college courses at the local community college and received credit for math and English through the Advanced Placement exams. After talking with someone at UCSC and looking at requirements, I discovered I could enter as a sophomore at Crown if I took political science over the summer plus two other classes, which I did.

Entering Crown as a sophomore meant that I missed the experience of exploring ideas and bonding during the Core Course, but I still loved Crown. I remember the first year – people who showed up late because they were participating in San Francisco’s Summer of Love, dorm parties where we smoked oregano as a joke to make the RA think we were smoking marijuana, long discussions with friends about everything happening in the world and in our lives.

During my time at Crown, I took classes in both English literature and psychology as well as chemistry, biology, and German. I loved the physiological psychology class with Dr. LeBoeuf plus the other psychology classes. I could see being a therapist as a possible career. I enjoyed the English classes but decided at that point that the careers offered by a degree in English weren’t what I wanted. After graduating from UCSC I worked with Dr. Joe Kamiya at his lab at UCSF doing brain wave research and entered a master’s program in psychology at San Francisco State. I never finished the Master’s because of disenchantment with the program, instead returning to Santa Cruz where I worked for the county and then as a school bus driver for the county special education department. I loved the students in the special education program and decided to get a special education teaching credential. I eventually earned two master’s related to education and an Ed.D. in Education. I was a special education teacher in K-12 classrooms for 30 years and then a professor in the special education credential program at the University of San Francisco.

Deciding to return to Santa Cruz and becoming a special education teacher both grew out of my experiences at Crown and UCSC. These experiences led me to want to make a difference in the world, and I feel I have through my work with my students.