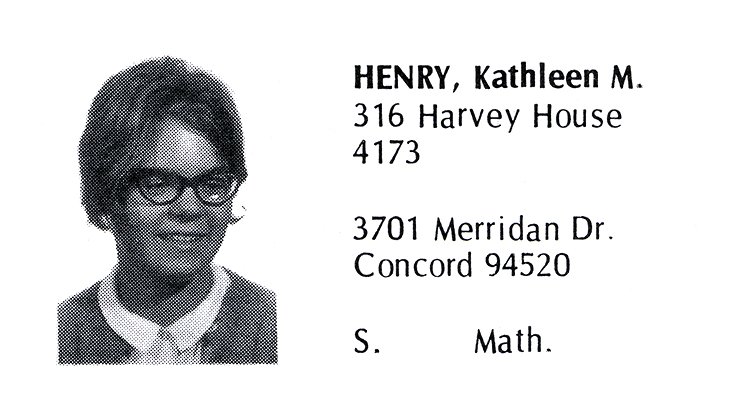 As a native of the SF Bay Area, our family took day trips to Santa Cruz. I grew up loving Santa Cruz. As I write this I can feel the sand between my toes.

From the first picnic, I knew Santa Cruz was where I wanted to go. The whole concept excited me! An experiment of groupings of small colleges and smaller sized classrooms with opportunities for real interaction and conversation on all sorts of topics. Professors and students coming from all over. To be in on the creation and formation of something new. And, in a gorgeous wooded forest!

Both academically in high school and with community involvement, I worked to meet the qualifications to make it into Santa Cruz. I chose Crown College because, at that time, I believed I wanted to pursue a career in Math and Logic. My interest in politics and law was also ever-present.

Being at UCSC and Crown was awesome!

One of my core and best learnings at UCSC and Crown was its philosophy – we weren’t just required and encouraged to find the answer(s) – we were also asked to discover and formulate the question(s) and describe the path(s) to get from one to the other. That constant feeding and nourishment of curiosity, mine and those around me, stretched my vision of possibilities that continues to inspire me!

I also learned to acknowledge limitations. I gradually discovered that my fabulous brain was not formulated to get a PhD in Mathematics, and I eventually switched to my other passion, a Politics degree. I loved being a Crown student, surrounded and living with people with gifts in math and science – sharp brains, great debaters, able to see the crux or core – with great sense of humor and willingness to explore. The Crown Core course, and courses in math, computer science, philosophy, and logic have enhanced my career and adult life to this day.

I also learned resilience. Back then we did not have letter grades; instead, “Pass, “Fail,” and written comments by our Professors. And, a final Exam or Paper before graduation. This was another aspect of UCSC I appreciated. Professors knew me and I got real feedback and comments (whether I agreed with them or not). However, in the outside world of grad schools, there was discontent with what we were doing that made it difficult to get into the law school I presumed I would go to. At the time, it was very disappointing. In hindsight, it was a gift. I went to another law school, the law school I was meant to attend. I am grateful for my time at Crown College and UCSC; it contributed to the blossoming of the blessings of my life and my career path.