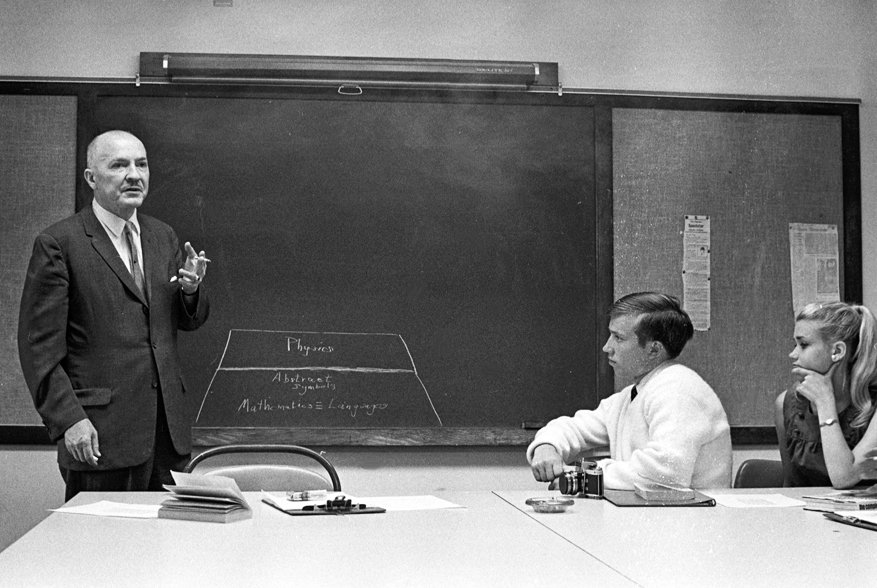 Part of the requirements for graduation from Crown was the completion of a senior seminar. I don’t recall what choices we had, but mine was the seminar on utopias conducted by the founder of the campus, Dean McHenry.

Dean McHenry had a special surprise for our last week. He was a friend of Robert Heinlein, whose book Stranger in a Strange Land was having a big impact on the latter part of the 1960s (although I notice that the book was published in 1961). He invited Heinlein to lecture our class, and then McHenry invited the class (and guests) to his campus home for dinner.

I cannot remember much more about even the dinner than what these photographs suggest. Except for one thing. I was seated next to Heinlein at dinner. Always the sophisticate, I was determined to make intelligent conversation, and so opened with something like, “Say, Bob, I’ve read your book. Great job!” I remember Heinlein, obviously impressed with my erudition, slowly put his knife and fork back on the table. He then looked closely at me and asked, “Which one?”

I obviously knew very little about the extent of this (so, what else is new). I think I read Stranger with some of the feeling I had for reading most science fiction, that is, that I’d finished with that by high school. In my defense, I see that Heinlein was not really all that prolific. But Stranger was a really, really big book (and I’ve read that it still has a following), and its reasons for being so had evidently failed to penetrate my foolish brain.

I have no particular impression of Heinlein, the person. For example, I don’t recall whether he talked as a lecturer or whether he sought your view, too. But the encounter with Heinlein was a very appropriate way to end the idealistic course and undergraduate period of my life. Next on the agenda was Vietnam, but that’s a subject for another time.