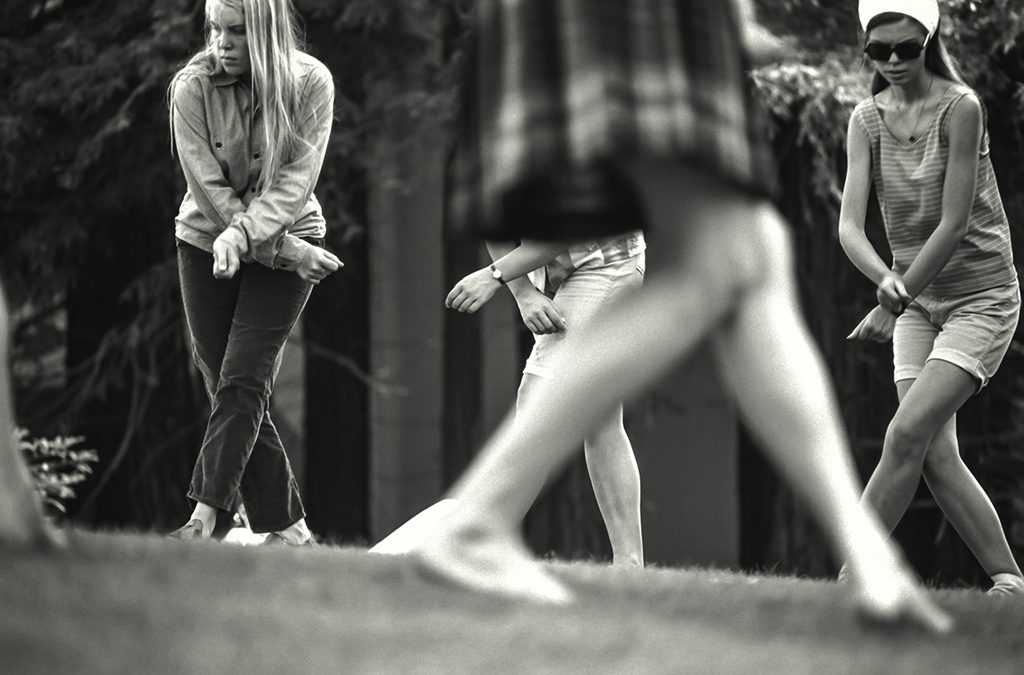 We became folkdancers through the process of elimination: At the City on the Hill in 1967-1968 there were no other reliable Friday night events or mass transit to the downtown. And we were pretty sure there would be women there.

When Hava Rapoport suggested to me and Jim Crane that we might enjoy the Friday night folk dancing at the Field House, we were quite amenable. So was Animal (aka Richard Pearson) and we became regular, although not particularly good, dancers.

The instructor was Marcel, who drove down from Palo Alto each Friday with a stack of LPs. He would spend 15 minutes or so introducing a new dance (I say introducing: He may have tried to teach, but I never learned). Some dances were gender specific, with male and female lines. Most were mixed line dances, but even then we had two lines: One for the experienced dancers (Animal called them “the pros”) and one for the rest of us. Those of us in the second line would dance behind the first, trying to copy the movements, about a half-beat behind.

It became evident very quickly that Hava was one of the pros. She was from Berkeley and had folk danced in the Bay Area while in high school. There are two women’s dances of hers that remain in my mind. The first was an Israeli dance, “Nut Picking in the Garden of David,” which was quite stylized. The other was “Sweet Girl,” which involved a great deal of energetic shaking of the upper body. Hava had 3 or four bangles on each forearm, but when she danced, it was hard to count them. I still wonder how the dance got its name.

My favorite dances were Balkan, sometimes Turkish, with the gaida, or bagpipe. The drone set a melancholy chant, while the high-pitched pipes encouraged frantic dancing. At 18, I had lots of energy, but not much of a sense of time, and the 5/4 and 7/8 rhythms were complex and I often lost my place. Joshua Redman later had a song in 5/4 entitled “Can’t Dance.” Because of the rhythm.

My last dance, as a Junior, was both the nadir and acme of my career as a folk dancer. It was at Cabrillo College and I was with my great friend, Nick Robertson, an accomplished dancer from Ojai. We were the same height (short) but he was strong and agile. We danced a syrtos with about 20 people, Nick in the lead, me second, keeping the beat and holding a red scarf in my right hand, from which Nick would hang and twirl. The nadir: Nick made a particular athletic move, I lost my grasp on the scarf, and Nick fell to the floor. The acme: I danced lead syrtos for two measures until Nick regained his place.