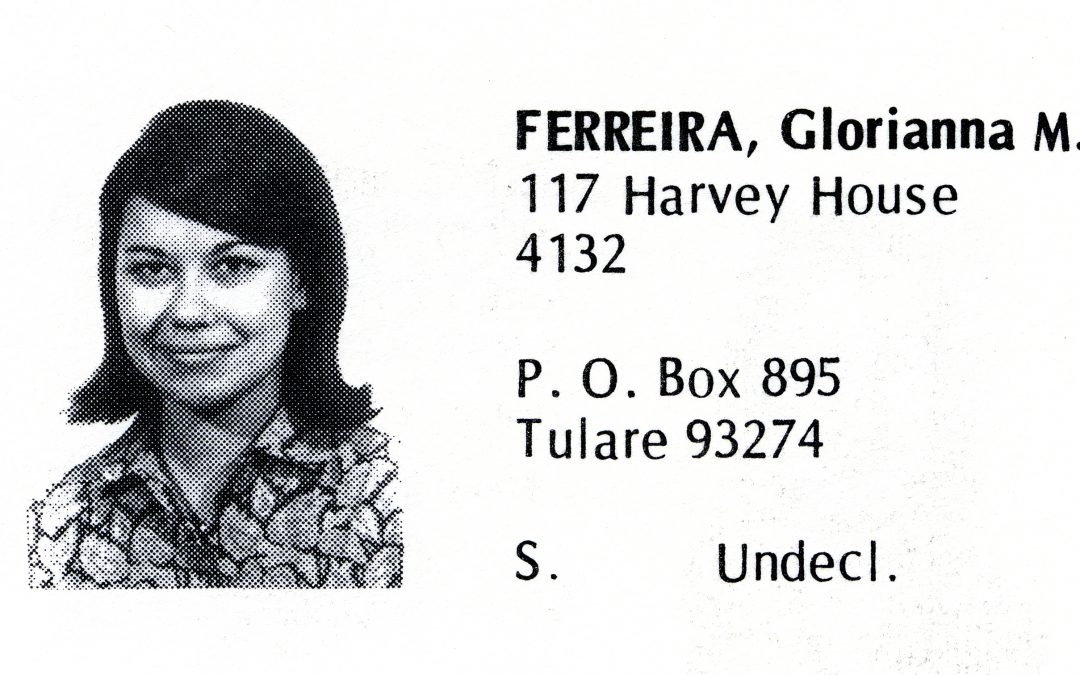 Sadly, Glory passed away in August 2020 right after she submitted her memory below and her blog post about the 1968 Yearbook. Her final words to us were: “Our school was the only place in my life that felt like a second home. It nourished imagination and spirit and still does, after all these years. With great love and so much gratitude and my fondest wishes to our endearing Banana Slug family.” You can read Ann Sorensen’s tribute to Glory here.

My grandparents arrived at Ellis Island in the 1″880s, descendants of two limbs from the family tree. My paternal Avo and Ava were Lisboners – most of them teachers, professors, and priests. My maternal line was rooted to the Islands of Terceira and Santa Barbara (the Azorian archipelago).

All of them – like most emigrants from Portugal – were determined to leave the poverty and anti-Semitism still slinking about. Some were Roman Catholic, others were Portuguese Jews disguised by day during the Portuguese Inquisition as Catholics to escape death. The Spanish Inquisition – like Coronavirus – crossed into our once tolerant, scientific nation of navigators and poets and rained down its darkness and ignorance.

My family settled in Arcata, California, and in the small rural town of Los Banos. Our extended family was loving, hungry for education, and of modest means. Many of us – including my maternal grandfather – became lawyers. Many cousins became teachers and medical professionals.

David, my young brother, inherited our father’s passion for food that led to a career as an innovative chef. Carlos Lee, my elder brother, was an engineer by day and pursued his passions with diligence (the study of birds and plants, etching, painting, sculpture, foreign films, and photography). He and my mother planted their joy of nature in me from a very early age.

They gave us the love, connection, and affection all life requires to thrive.

I read about UC Santa Cruz at the local library in Tulare, California. My whole body shook at the thought of such a place – a consortium of dreamers and innovators creating community in the latest experiment of the University of California. Two other students at Tulare Union High School were similarly bent on attending UCSC. Brett Stephens was a year older and was accepted at Stephenson. And Sam Magill? I only learned he had been accepted at UCSC through our senior class yearbook.

Sam-Wise. We intersected twice before at TUHS. We moved in different circles. We played the roles respectively of Lotus Blossom and Captain Fisby our Junior Year (Teahouse of the August Moon), and each of us was honored to represent our school at UC Davis’s Girls State and Boys State. (Judith Weissberg is my second beloved friend from Crown. We first met the summer before our senior year of high school and bonded immediately at Girls State. Judy was her school’s Girl State representative from Redding. I had no idea we would meet again as Crown College classmates in 1967! Later. we became roommates in Farmersville, California where she worked in the trenches for Caesar Chavez and the UFW as one of his brightest legal advisors and tactitians. I commuted to Tulare for my work as a Food Stamps and Medi-Cal Eligibility Worker at the Tulare County General Hospital.)

My mother cried after dropping me off at the entrance to my new world, as I’m guessing many of yours did too. (“Are they all hippies?”)

No words can express the electricity and excitement UCSC glowed with. My teachers became mentors and remained so for a lifetime. One of my best teachers was Jessica Lee, the precocious 5-year old child of Paul Lee and his artist wife. Jessica introduced me to antique buttons and the latest Beatles’ albums. She slept in an aerie fashioned from pieces of wood and snuggled in with her favorite toys and books. When you looked up at her sleeping, she was not much different from a beautiful fledgling Golden Eagle fed by both male and female parents – mates for life.

Dr. Collette’s passion was creating new and fragrant hybrids of primroses. One work-study job linked me to him, and we planted his primroses all around the campus. One was sunset orange and literally permeated the air with the smell of ripened peaches.

Althea Short, the silver palomino who once pranced with The Jose Limon Dance Company, was my dance instructor who linked me with the Santa Cruz Public School partnership between UCSC students and grammar school children. Althea inspired me to create classes for kindergarteners and first graders melding movement, nature studies, and music. The children opened up my heart to the awareness of a philosophy of movement and expression which are essential for the whole human being. These classes, photographed by my older brother Carlos, and a small book of my Ikebana drawings on exquisite papers hand-made in Japan morphed into the Independent Study. There was the oral presentation – the most difficult challenge of all.

Professor Weygant, a soft-spoken art teacher and formidable modern artist himself, encouraged me to expand my work from tiny watercolors detailed by Rapidographs of actual Ikebana arrangements to VERY LARGE canvasses and bold spontaneous abandon. “Go Big! Let your feelings out.”

Dr. Kenneth Thimann? He was a giant academic with such a soft, encouraging manner. I spent another work-study stint organizing and updating his meticulous personal library. I still have the precious foreign stamps of butterflies and dignitaries that he kindly peeled off before I left and presented in a lovely envelope. He corresponded with hundreds of colleagues and friends.

MY SMALL CIRCLE: Ann Sorensen, Judith Weissberg, Panthea Swift with her bunny rabbits and sewing skills (she created a green satin ball gown trimmed with delicate black lace for one of my mother’s handmade fabric dolls), Jim Lapsley, and the dedicated peers who created our first book of memories from the inaugural first year at Crown College:

AND YEAH: “It takes a village to build a book of memories from our first year at Crown College.”

Our school was the only place in my life that felt like a second home. It nourished imagination and spirit and still does, after all these years. With great love and so much gratitude!
Glorianna “Gazelle” (Pan’s nickname)

With my fondest wishes to our endearing Banana Slug family. (And do you know if our mascot – Sammy the Slug – was named after Sam Magill?)