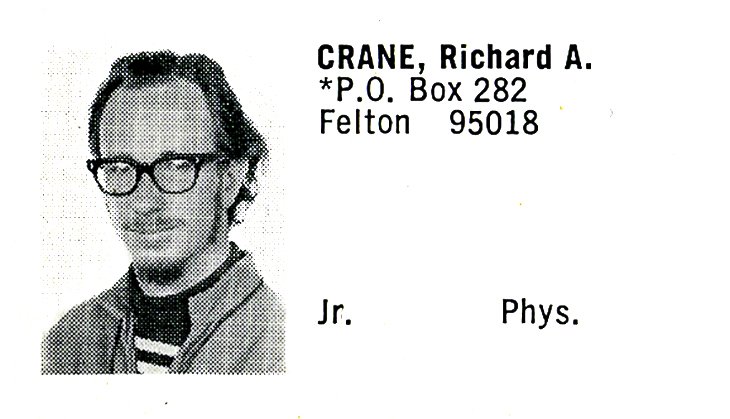 Coming to UCSC by a different path

My journey to UCSC was a bit different from students there. I began college as a student in physics at the California State Polytechnic University in 1964. A year and half later a selective service board error resulted in me being re-classified to 1-A status (ripe for draft and off to Viet Nam). I joined the Navy under a program that would me allow to finish my current year before starting boot camp. A few weeks later the draft board corrected the status back to 2-S (student in good standing), but it was too late for me to get out of the Navy. Uncle Sam owned me. The Navy and I did not get along and I was placed on inactive reserve status 22 months later. Free at last, I became part of the beam operations group at the new electron accelerator (SLAC) at Stanford while saving money to go back to school. Two of the experimenters I worked with were David Dorfan, a UCSC physics professor, and Matt Sands, the vice-chancellor at UCSC. They convinced me to apply to UCSC and even wrote my letters of recommendation. Sweet. Started back to school at Crown full time in 1969 at age 23. I helped set up the physics labs. Along with four other students I had a horse on campus. The common pasture was where the field house is today. Imagine, riding to class at Nat-Sci. What a beautiful, natural setting for a campus.

The broad UCSC experience gave me a strong sense of wanting to change the world and make it better. That feeling became a guiding force (a vector to you physics types). Solar energy became my passion. Upon graduation, I joined a research group at Stanford as a research engineer. Spent 20 years there mostly working in the field of photovoltaics and co-founded a company (SunPower) with my professor. After 10 years in the start-up, I returned to Stanford as Technical Director of the Nanofabrication Facility for seven years until I retired. During that time, I made a point of meeting with undergrads and occasionally high school students as groups and sometimes one-on-one in the manner embraced by UCSC. It was good to carry on that special tradition.

Having spent only two years at Crown, being a commuter, and being older than most of the students, I missed out on the full Crown experience but was there long enough to appreciate the uniqueness of the teaching philosophy and the overall experience. With Crown’s and UCSC’s inspiration, I feel that I truly did make a difference in the world.

Thank you, Crown and UCSC and all the professors for a job well done.