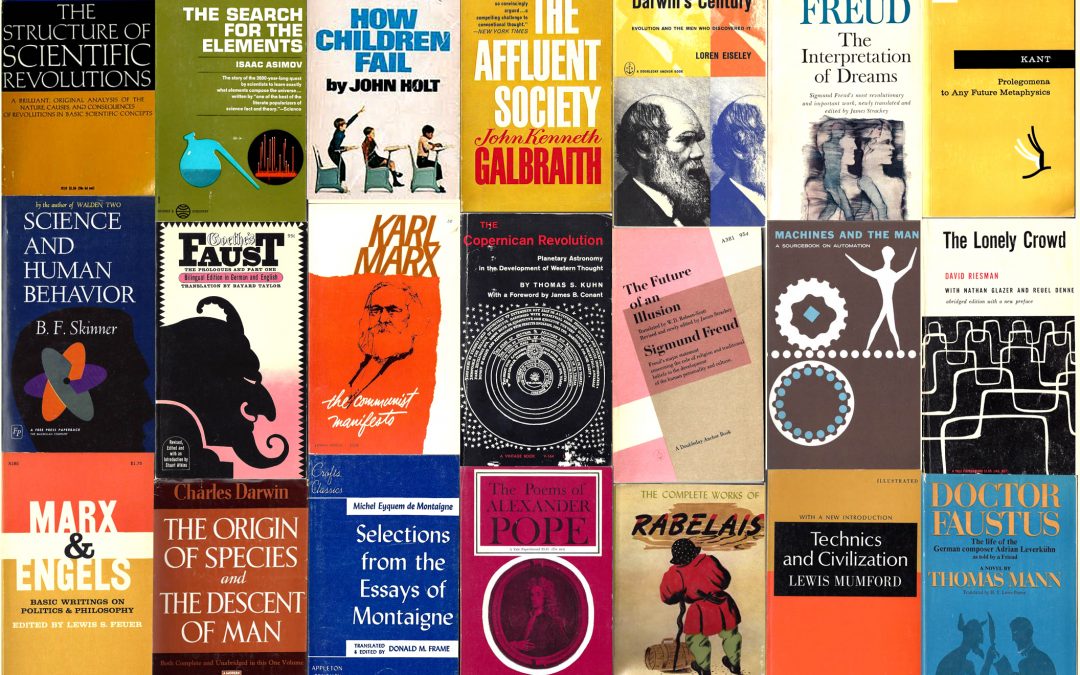 The Magnificent Ambersons. Was there ever a more boring novel? It was our assigned summer reading in 1967 and, I must confess, it was the only time that I questioned my decision to attend Santa Cruz. As an American historian, I understand now why the book was assigned—dealing as it does with the decline of an aristocratic family as America industrialized after the Civil War—but what a way to start off Core Course! Here is a link to a wonderful article about Booth Tarkington.

The Core Course served two purposes. The first was to force a group of intelligent-but-headstrong students to contemplate the role of science and the scientist in our society. For a college focused on the sciences, that orientation was clearly a good one. However in retrospect, although the course provided ample opportunity to consider how modern society was shaped by science, with the exception of Mumford’s Technics and Civilization and Goethe’s Faust, the course never really forced us to confront ethical issues regarding adoption of technology. Or, if it did, I don’t remember the discussion. Frankenstein was well in the past. Gene-editing, cloning, and artificial intelligence were yet to come. But, the atomic bomb remained in everyone’s memory from our duck-and-cover drills in grade school. It is odd that ethics of scientific discovery weren’t examined more and that “our friend the atom” wasn’t critiqued.

The second purpose was the creation of a community of scholars. Large lecture classes were nothing new, but the give and take of small group discussion led by a faculty member, where everyone had done the reading (and thought about it!) was invigorating. Unlike high school, almost everyone took the reading seriously. We learned to consider other interpretations while we discovered more about each other. Discussions in the Crown classrooms often led to further talk after class, in dorm rooms, or in the dining commons. The Core Course, like College Nights, helped break down the sub-communities created by the geography of floors, dorms, and quads. The Core Course introduced us to each other, it gave us a college identity, and it created a community from a collection of individuals. In retrospect, I realize that we were being prepared for graduate school even in our first year at Crown.

Core followed the quarter system. In the Fall of 1967, we studied History of the Impact of Technology, with lectures by Drs. Olson (History of Science) and Bunnett (Chemistry). For me, Thomas Kuhn’s The Structure of Scientific Revolutions (1962) made the greatest impression that quarter, although Marshall McLuhan’s essay “The Medium is the Message” still has impact. We may have read Mumford’s Technics and Civilization that quarter as well. Winter quarter of 1968 was devoted to Science, Philosophy and Religion. That quarter’s lectures were given by Drs. Gould and Lee (Philosophy). Readings included Kuhn’s The Copernican Revolution, Darwin’s The Descent of Man, Whitehead’s Aims of Education, and Week’s Machines and Man. Spring of 1968 we examined The Cosmos and the Arts, with main by Drs. Leicester (English Literature), Lillyman (German Literature), and Weygandt (Art). We read Pope’s “Essay on Man” with its rhyming couplets on “the Great Chain of Being” (“all are but parts of one stupendous whole/Whose body Nature is, and God the soul”. But I still prefer A.E. Housman’s more modern version that examines the role of alcohol in comprehension “And Malt does more than Milton can/To justify God’s ways to man.”) We also read Goethe’s Faust, that quarter and a bit of Rabelais.

We read lots of selections from books, including C. P. Snow’s The Two Cultures, B. F. Skinner’s Science and Human Behavior, and Darwin’s On the Origin of the Species, but I can’t remember which books were in which quarter. It was a lot of reading, but it was a 5 unit class!

For me, Core was a success. It caused me to think about science in an organized manner. Although I’m an historian, for 32 years I worked at Davis with agricultural scientists, and Core Course helped me understand their culture. As a community builder, Core Course was a tremendous success, bringing together first-year students from all over California and providing them with a common experience. At the time, I didn’t think much about the faculty (they were, after all, higher up in the great chain of being). But, looking back, I realize that many were only about a decade or so older than we were, fresh out of graduate school, and partaking in an educational experiment, just as we were. I suspect that participation in Core Course also helped to create a community of Crown faculty. It was a common experience and helped bridge the two cultures. The faculty, too, were pioneers, figuring it out as they went along.

Post Script: The “hive mind” of about 20 early Crown alumni collaborated in identifying the list of readings used in the first two years of the Core Course. We think we are correct, but even collective memories fade. If any of you have the actual syllabus for the first year of the Core Course PLEASE share it with us so that we can update this post. We hope to find the actual syllabus for the course in Special Collections at the McHenry Library when it reopens, but for now it is locked away due to Covid-19.