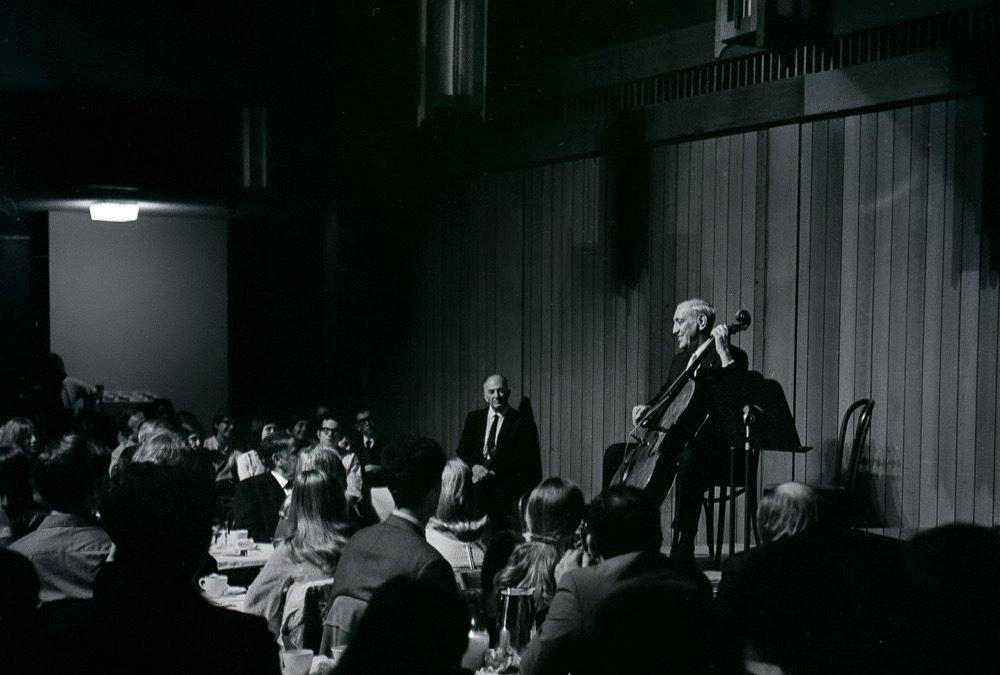 I arrived at Crown College in 1968, having been shown, by a high school guidance counselor, a picture of  a new college with dormitories nestled in the woods. More than 50 years later, much of what I learned in my classes has been forgotten. However, I do have vivid memories of several Crown College Night performances in our dining hall.

Thanks to the interesting connections of Prof. Paul Lee, who had been the Protestant Chaplain at Brandeis University, we had some curious speakers. One was Huston Smith, the great scholar of world religions. He spoke about the only empirical discovery with which he had been credited, and for which he received a musicological award of which he was proud:  he was the first Westerner to hear and record Tibetan multiphonic chanting in the Himalayas. He lectured, played a recording, and showed his film of Tibetan monks chanting. To borrow a 60’s phrase, it was mind-blowing.

Perhaps it was also thanks to Prof. Lee that the composer John Cage visited. I do not remember what he said or performed. Could it have been four minutes and thirty-three seconds of silence?

A physics professor from Florida spoke to us about his quest to recreate a Stradivarius violin and invent an acoustically improved guitar. This quest had led him to Andres Segovia, whom he described as a  Renaissance man, and who had encouraged him in his quest.

The warden of San Quentin came to speak to us on a College Night. Many in the audience were opposed to the death penalty, and none were more vocal than our classmate Igor and his partner who raised a din, effectively shutting down the speaker who walked off the stage. Sympathetic to the protest then, today I would question the heckler’s veto.

The great cellist Gregor Piatigorsky performed on a College Night. He carried his cello aloft as he strode across the room and on to the stage. He smoked throughout his performance. He also played a piece with UCSC cellist William van den Burg, who may have been a student of Piatigorsky’s, and, in any case, plainly held Piatigorsky in awe. Piatigorsky flattered us by saying that the acoustics of the dining hall were as fine as those of the conservatory.

Theodore Roszak had just published a book, The Making of the Counterculture, that sought to explain, well, the making of the counterculture. Once again, it was a personal connection that brought him to speak at Crown College Night, as the UCSC mathematician Marvin Greenberg and Roszak had been contemporaries, graduate students, and friends at Princeton. Roszak was a timely speaker, because his book captured the zeitgeist.

One College Night speaker, who may have been a poet, and whose name I do not remember, delivered a line that I do remember: “Sometimes at night, the only sound I hear is the sound of my fingernails scraping the bottom of the barrel.”

Our Provost Kenneth Thimann, whom I viewed as a kind and avuncular presence, walked to the stage one College Night and sat down and played the piano. True, the performance was wooden. The remarkable thing, however, was not that the famous plant physiologist played the piano well, but that he played at all.

Close to graduation, the cartoonist Charles Schultz spoke at College Night about his Peanuts comic strip characters and his own life, while deftly drawing his characters on a chalkboard. Someone had the presence of mind to clear lacquer spray the chalkboard after Schultz’s talk, in order to preserve his chalk illustrations. Sometimes I wonder what became of that chalkboard.

Part of the 60’s blues revival, Sonny Terry and Brownie McGhee played a rousing concert with harmonica, banjo, and vocal embellishments. One would have had to be a blues aficionado to seek them out.  Fortunately, they were on the concert circuit and came to UCSC.

The great musician songwriter and satirist Tom Lehrer was a member of the faculty and taught statistics at UCSC. Though he insisted he was finished performing and now a serious academic, someone must have convinced him to perform once again. And he did. One of my regrets is that I missed his performance at Crown College. Today, I watch his performances on YouTube, which, of course, was not an option back then.