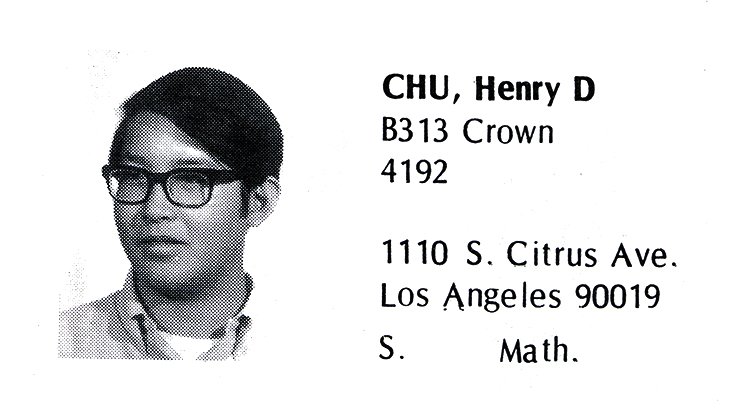 In the midst of my senior year at Loyola High School, in the fall of 1966, as all my classmates considered our next educational steps (Loyola is a college preparatory school where nearly 100% of graduates went on to college) I considered my options. Many of my classmates considered Catholic institutions, specifically many of the Jesuit colleges scattered around the country. I was in a quandary. I had immigrated to the US less than 10 years before. My parents and I were refugees, leaving China in 1950. We had been in Hong Kong, Saipan, Japan, Okinawa, and Hong Kong again before arriving in California.

Although unfamiliar with American colleges, my mother is a college graduate and both parents valued higher education. That I would be going to college was a foregone notion, especially with the Vietnam war raging. But where? UCLA? USC? Those were the well-known universities in Southern California.

My good friends were applying to Stanford so I followed suit. Another good friend chatted up UCSC a new UC campus with a novel educational approach. Of course, I knew nothing of the campus nor its educational philosophy. Nonetheless, I thought if Sean liked it so much, it must be a great place. So my applications to UCSC and Stanford were submitted.

UCSC, was it a good fit for me? At that time, it was a small residential college along the lines of so many small liberal arts colleges that dot the American educational landscape. In that way, it was a perfect environment. It allowed me to develop my Americanness to the fullest. The close interaction with those who would become my lifelong friends shaped who I am. I imagine what my life and worldview would be had I commuted to college in LA; how unidimensional my life would have become.

So I lucked out. Sean, on the other hand, was not accepted. He ended up attending UC Riverside for a while before enlisting in the military. Like me, he became a doctor practicing in North Carolina.