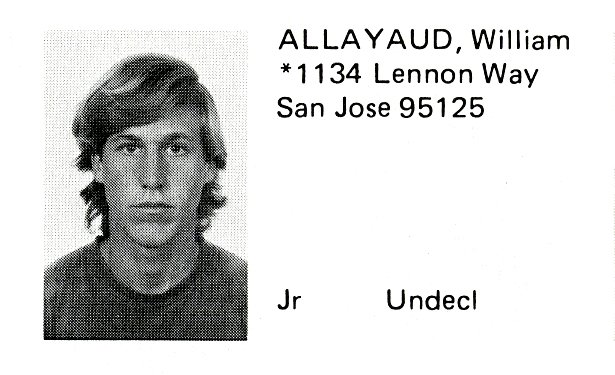 My family lived over the hill in San Jose, and I had been visiting the beaches of Santa Cruz since I was in 4th grade, so I instinctively knew that there were good reasons to be in Santa Cruz. And, my older sister had transferred there from San Jose State for her junior year and reported good things about the educational processes going on. But, my freshman year did not start with a bang. First quarter, this excited freshman took a class in what I thought might be my major – geology. The professor (I won’t name names but he was a well-known, esteemed older man who founded the department and would soon retire) took a disliking to me right away. I was a “long hair,” and I’ll acknowledge today, sometimes class clown. Long story short, he gave me an unfair written evaluation — now I know the evaluations can be subjective and were at times, but it was unfair because I had the evidence the I did far better than he reported due to the fact that the only measure of our performance were quizzes and the mid-term and final. These were definitive test scores. I could have successfully appealed my “grade” to the Academic Senate, but I talked it over with my kind and calm advisor and professor of Politics, Peter Euben, and decided to let it go. In any case, the bad taste in my mouth quickly went away because my freshman year was a phenomenal experience. I explored the caves along Empire Grade Road, learned about the tax stamp on Lebanese hashish, participated in the Student Strike Steering Committee April-May of 1970, marched on Fort Ord (you should have seen the barbed wired, tanks, and helicopters overhead as I guess they thought we might try to storm the place), learned how to surf at Cowell’s and Pleasure Point, and probably most importantly, gained perspective from the Crown core course.

That year, I began to realize that I was surrounded by a bunch of brainiacs and even true geniuses and that I was not too likely to leave an academic mark in my wake in the field of hard science. But, I had a secret weapon – what some say was the best outside jump shot at the school. I spent an inordinate amount of time in the East Field House (the only gym on campus then) for the next four years honing my skills. Little known fact: when we formed the inaugural intercollegiate basketball team in 1972, the athletic director said we needed to have a mascot and he repeatedly said that we would be the Sea Lions. Our team resisted and we ended up just being “UCSC.” If not for our rebellious and nonconformist nature, it is very possible that the “Banana Slugs” would never have come to fruition.

My junior year, I settled into the new Environmental Studies program, and 40-plus years later, I am still working in the field that I majored in. One thing I took with me from Santa Cruz for sure was expressed in a bumper sticker that was around over three decades ago and has been recently used by the administration to promote the school: “UC Santa Cruz – the original authority on questioning authority.” The educational focus in my four years was the Socratic method, and it has served me well ever since. I am sure there is still magic on that campus and in the classroom. Long Live U.C. Santa Cruz!