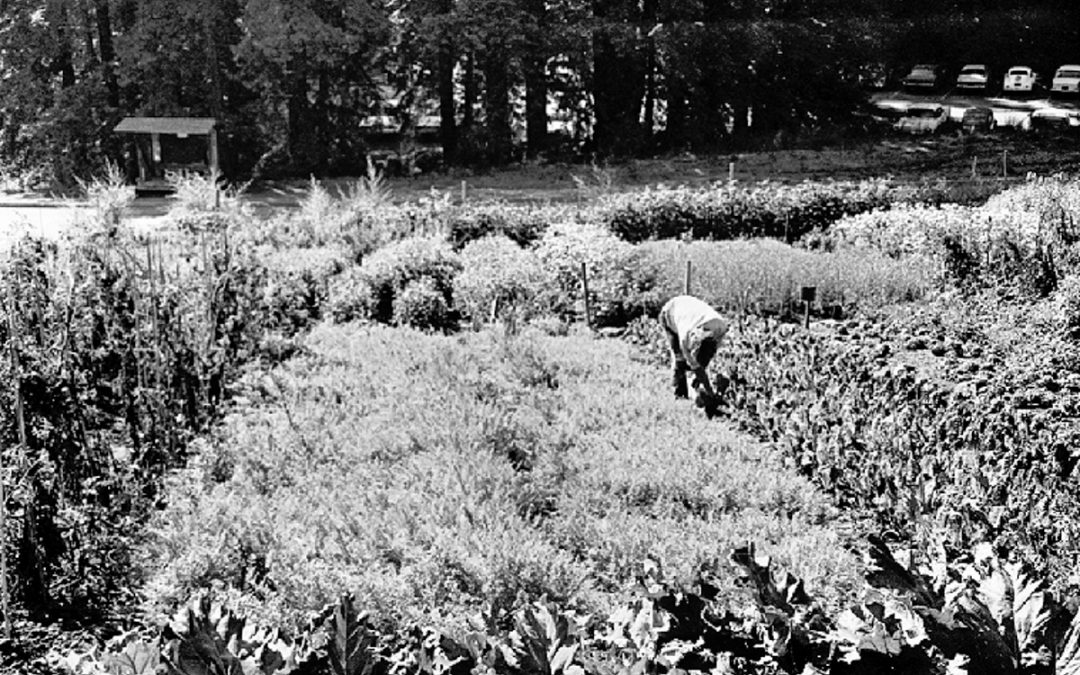 When we created this website, it was clear that Alan Chadwick’s Garden had to be included. Although I enjoyed and was influenced by it, being averse to hard physical work, I was never an apprentice. If anyone would like to pen a different paean, please do so, and we will post it. Much of the history related below can be found at http://www.alan-chadwick.org/

I wish I had spent more time in the garden. I thought it had always been there and would last forever, but in reality, its time under Chadwick’s direction was similar to that of the class of 1971. It began with Chadwick’s arrival at Santa Cruz in March of 1967, six months before Crown’s first class, and ended with his departure/ouster in 1972. Chadwick was 58 years of age when he arrived. He went downtown, purchased a spade and a wheelbarrow, and began double-digging the four acres of rocky, poison-oak infested, slope to the east of Provost Thimann’s house. It extended from what would become Merrill to the campus entrance kiosk and bus stop at the bottom.

Chadwick was born into an aristocratic English family in 1909. His mother, a theosophist, was a follower of Rudolf Steiner, which accounts for Chadwick’s knowledge of bio-dynamic agriculture. In his late teens and early twenties, Chadwick apprenticed at several commercial nurseries specializing in hot-house vegetable and fruit production. This included one year in France, where he learned the intensive, double-dug, raised bed system of production. In his twenties, Chadwick discovered the theater, becoming an actor specializing in Shakespeare. His dramatic sense was apparent when lecturing.

I never worked in the garden, but greatly enjoyed visiting it. Plots were divided by trellises every 30 or 40 feet, running down the hill and often supporting Scarlet Runner beans or climbing, flowering vines. Although we don’t particularly care for Scarlett Runners as eating beans, Carol and I still plant them every so often in our garden for color and memory. Flowers and vegetables were interspersed, as Chadwick believed the flowers inspired the vegetables to grow. In spring quarter it was a riot of color, but something was always growing even in winter and at the bus stop, at the bottom of the hill, were fresh flowers in buckets, free to be taken to dorm rooms. I took the garden for granted.

Chadwick was a mystic. He did not use chemical controls, pesticides or fertilizers, substituting compost (raw materials collected from the dining commons) and apprentice labor. This bothered some U.C. scientists, and apparently the College of Agriculture and Natural Resources at Davis (where I was to spend the next 45 years) were opposed to U.C. supporting the idea of what was considered non-scientific agriculture. Lewis Mumford, in his Technics and Civilization (Core Course!), wrote about science and measurement: “But with this gain in accuracy, went a deformation of experience as a whole. The instruments of science were helpless in the realm of qualities. The qualitative was reduced to the subjective; the subjective was dismissed as unreal, and the unseen and unmeasurable non-existent. . . As the outer world of perception grew in importance, the inner world of feeling became more and more impotent” (p.49). Chadwick’s garden was an experience, not an experiment. And, empirically, it was hard to argue with the results, which were there for anyone with eyes to see.

In 1972, the campus was developing a new program, the farm, which ultimately morphed into Agro-Ecology. Perhaps the campus wanted to be rid of Chadwick’s bio-dynamics and his talk of “the Revolutionibus” (http://www.alan-chadwick.org/html%20pages/gallery/blackhirst-revolutionibus.html). A split occurred among Chadwick’s apprentices and the campus fired Chadwick in 1972, the same year Carol and I went to Davis. Chadwick moved to what is now Green Gulch Farm in Marin, which had recently been purchased by the S.F. Zen Center, and helped establish a garden there. The following year he was invited to Covelo, to create his last garden.

In 1978 I started my job with U.C. Davis Extension, creating courses in agriculture. My predecessor had created a one-day class with Chadwick in Covelo, so Carol and I drove there on Friday afternoon in order to register attendees the next morning. The Covelo garden was magnificent, with long rows and vistas, totally different from the slope at Santa Cruz, but at the same time similar, with its double-dug, French-intensive raised beds. Following the tour, Chadwick gave his lecture to us, in which he explained, in an hour or so of very theatrical performance, the essence of the world as he saw it, of the ebb and flow of life here on earth and in the stars. He repeatedly referred to this force as “the Revolutionibus.” Finally, he slowed and then stopped. He was, after all, 69 years of age and had just given a lengthy performance. He asked, “are there any questions?’

A middle-aged man raised his hand and asked “Can you please explain what the revolutionibus is?”

Chadwick visibly sagged. He tiredly replied, “Was I that bad?”

By the time we saw him in Covelo, Chadwick was ill from prostate cancer. He left Covelo and spent his last days at the Zen Center at Green Gulch, where he died in 1980. He was 71.

I wish I had spent more time in the garden.