A Cross Between a Hippie Pad and a Brothel 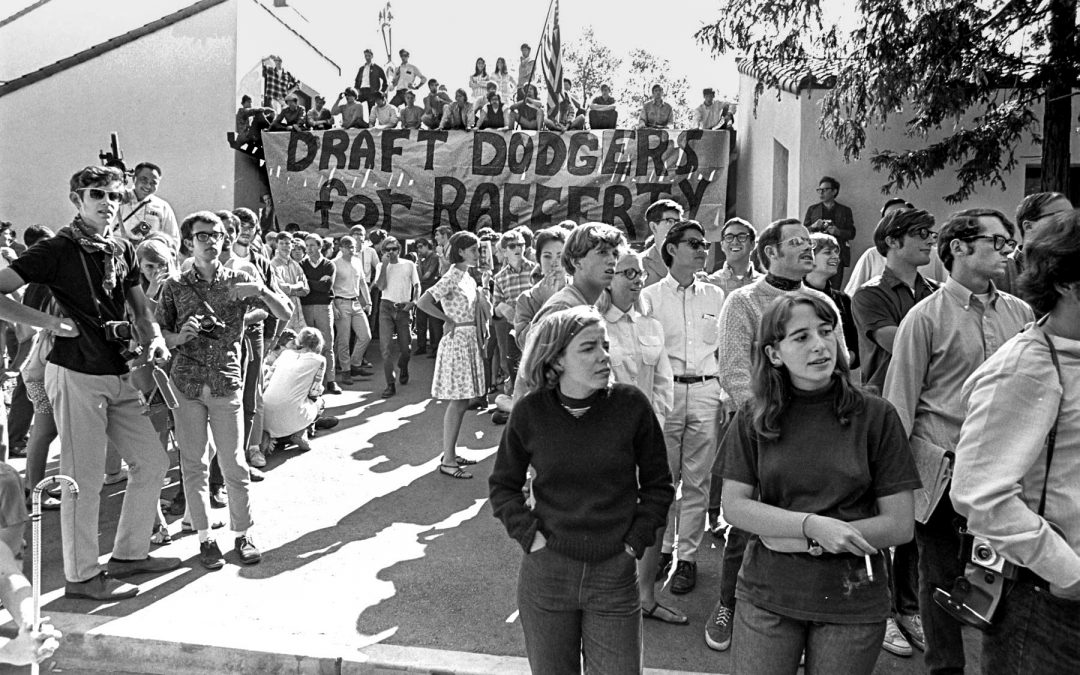 A.  Who Was Max Rafferty?

In case you have forgotten about Max Rafferty, here are a few snippets from his New York Times obituary when he died from a car accident in 1982:

“Dr. Rafferty, whose state career was launched in 1961 by a fiery speech that denounced public schools for no longer teaching patriotism, gained national attention in the 1970s with his attacks on teacher strikes, evolution, fair-housing legislation, sex education, and busing to achieve racial balance.”  He “angered professional educators for revoking the teaching credentials of 1,000 ‘morally unfit’ teachers, and supported ‘a little bit of censorship’ in public school libraries.”

In 1968 he ran as a conservative against the then incumbent U.S. Senator Thomas H. Kuchel.  He won the Republican primary, then lost in the general to Alan Cranston. In 1970 he then lost his bid for a third term as State Superintendent of Public Instruction to his former assistant, Wilson Riles.  He then moved on to serve as Dean of Education at Troy State University in Alabama, thereby increasing the average IQ in both states.

Traditionally (before the Free Speech Movement at UC Berkeley) the University of California regents met on University campuses generally Berkeley and UCLA because they had substantial facilities to accommodate a large formal meeting.  After the Free Speech Movement, they retreated to places like the UC Extension Center in San Francisco and were roundly criticized for it.

In 1968 they decided to return to UC campuses.  Unwilling brave Berkeley or UCLA, they decided to come to UC Santa Cruz in October. Rafferty, as state superintendent of Public Instruction, was an ex-officio member of the Board of Regents and so he came.

Chancellor Dean McHenry decided that the best to hold the Regents meeting was up at Crown College.  As the science college, it was perceived as being less radical than Cowell, the humanities college, and Stevenson, the social sciences college.

Kenneth Thimann, the provost of Crown, was not at all pleased with the Regents taking over his academic institution, but he made a deal with McHenry.  The Regents could have the common room (as the dining hall was then called), but they were to stay strictly away from the college office, leaving it to its normal academic and administrative functions.

In those days the common room was divided into three parts. The main central part and two wings.  The Western wing – – the one toward the academic offices – – would later become Banana Joe’s, but at the time was open seating area.  The Eastern wing – – the one toward the parking lot – –  was turned into the Regents’ office; they moved in desks and photocopiers and everything that the Regents’ administrative staff needed.  That way, the Regents and their staffs did not need to bother the Crown office.

It did not work out quite the way that the higher-ups had planned.  1968 was probably the most momentous year in modern American history.  It started off with the Tet Offensive, three South Carolina State students were killed in 27 wounded when they were fired upon while protesting the segregation of the only bowling alley in town; Johnson announced he would not run for re-election; Martin Luther King was killed; Bobby Hutton was killed; Columbia University was taken over and taken back by the police; Robert Kennedy was killed; the Democratic Convention in Chicago dissolved into chaos and police beatings;  earlier in October Mexican police and military troops killed thousands putting down demonstrations in Mexico City; and just two days before the Regents’ meeting Tommie Smith and John Carlos raised their gloved fists on the Olympic platform where they were getting their medals In the 200m dash to protest violence toward and poverty among African-Americans.

Along with the national and international events, Ronald Reagan had defeated Pat Brown two years before and was a very vocally conservative governor. Max Rafferty, as described above, was extremely conservative and had poured gasoline on the fire by describing Crown College as a cross between a hippie pad in the brothel.

The student reaction was in the best UCSC tradition. It was radical, it was inventive and it was funny.  One of the women’s dorms in the upper quads decorated its entire stairwell with a brothel price list with special prices for Max Rafferty.

There was a huge demonstration in the Crown quad in anticipation of the Regents’ arrival.  It was large and very colorful, but quite peaceful.

Governor Reagan, being either well-informed and or having a real sense of theater, waded through the crowd and went on into the common room.

F.  Rafferty And His Staff Panic

Rafferty and his staff, by contrast, panicked completely.   The first door they came to when they got out of their cars was the door to the College office.  They barged in and locked all the doors.  Peggy Vecchione, the office manager,  explained if there was an office for the Regents and the Regents’ staff and pointed it out where it was. They ignored her.  Dr. Thimann came out and asked them to leave. They refused, claiming that they would be killed if they left the building.

At the time, I worked for Peggy Vecchione and had a key to the side door of the office.  I forget why I went into the office.  I may have decided to do it on my own or Peggy may have called me.  I let myself into the office and tried to talk to Dr. (EdD) Rafferty and his staff. His staff consisted of several women with beehive hairdos and all of them were quite drunk.  I tried to explain that while UCSC students might be fairly noisy, they were quite middle class and we’re not going to physically hurt anyone.   They did not believe me.  By all appearances, they were quite terrified.

I forget how the impasse was finally resolved. I remembered they stayed there for quite a while. I think, in the end, Peggy called the University Police and asked them to escort Rafferty and his staff to wherever they wanted to go.  As I remember, they got into their cars and were escorted off university property by the university police.  Not because the police wanted them off the property, but because they were afraid to go into the Regents’ meeting.

It was a very strange incident.