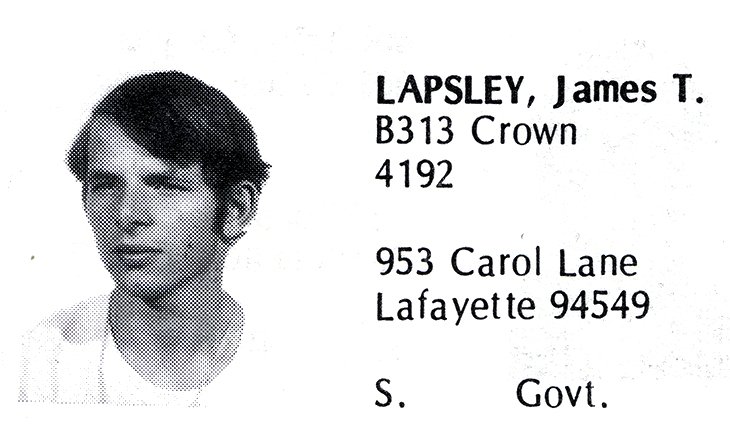 I was born to go to “Cal.”  Although both my parents were from southern California, they each had headed north to “Cal,” as they referred to UC Berkeley, for college.  They met after graduation during the war, when my dad, an engineer with a specialty in metals, was doing “secret stuff” for the war effort as a scientist and my mother was working as a draftsman at the “Rad Lab” and later at Oakridge, Tennessee.  Following the war, Dad became a professor in the College of Engineering, they married, and I popped out in 1949.  We lived in an apartment on Euclid Avenue, a block from campus, but a year and a half later, with my brother on the way, my folks sold the lot in Berkeley where they had planned to build, and bought one of the early homes in Lafayette’s first big housing development.  I grew up in a home full of love and books, academic achievement was emphasized (and I was a very dutiful first born) and going to the University of California, specifically “Cal,” after high school was the unspoken assumption.

By my junior year in high school, I was bored and alienated.  The Free Speech Movement had radicalized Berkeley, which had always been bohemian, and once I had a driver’s license I visited there as often as I could.  The Berkeley and SF music scene was developing.  I started growing my hair—a premature hippie.  When we swam, the PE coach made me wear a (gasp) bathing cap to humiliate me.  I got a racer’s cap and glued a rubber duckie on the back.  I swam one length and was told to get out of the pool.  I never had to swim again, but neither was I allowed to run track or cross country as a senior. So I played the tutor in “Medea” and started hanging out with the “art” crowd, where all the girls wore black clothes and said “ciao.”  I was ready for college, but where?

Berkeley was certainly familiar—too familiar and too close to home.  Dad, as a UC academic, had been following the idea of Santa Cruz since its inception, and in the summer of 1966, he and I visited UCLA, UC Santa Barbara, and then, Santa Cruz, on the way back north.  I remember driving on the access road between the redwoods and behind the Crown dorms, which were just getting a coat of white stucco.  Dad said the architecture was supposed to mimic a Mediterranean fishing village.  Well, they caught this fish.  I was hooked.

I don’t remember applying specifically to Crown—I knew I wanted to study history or political science prior to law school (so free-thinking and yet so self-planned!)—and think I applied to Stevenson.  But there was space at Crown and when I arrived in September of 1967, I knew I was home.  The dorms (and later the classes) were filled with people like me:  Really bright people serious about learning but not so serious about themselves that they couldn’t laugh.   Faculty weren’t much older than we were and it was easy to get to know them as people too.   The intense discussions of Core Course readings were a delight and often carried on after class.  The sense of being the first class, being pioneers, was palpable and heady.  And the view across the bay was always beautiful, even in the rain.  What an opportunity!

The people I met on the upper-floor of third floor Maxwell House remain my closest friends, and, of course, the following year, I met Carol Barkley.  We married in a meadow (now paved) above the quarry in spring of 1971, with a reception at The Whole Earth.  We are still happily married—you do the math.  Thank you, Crown College.